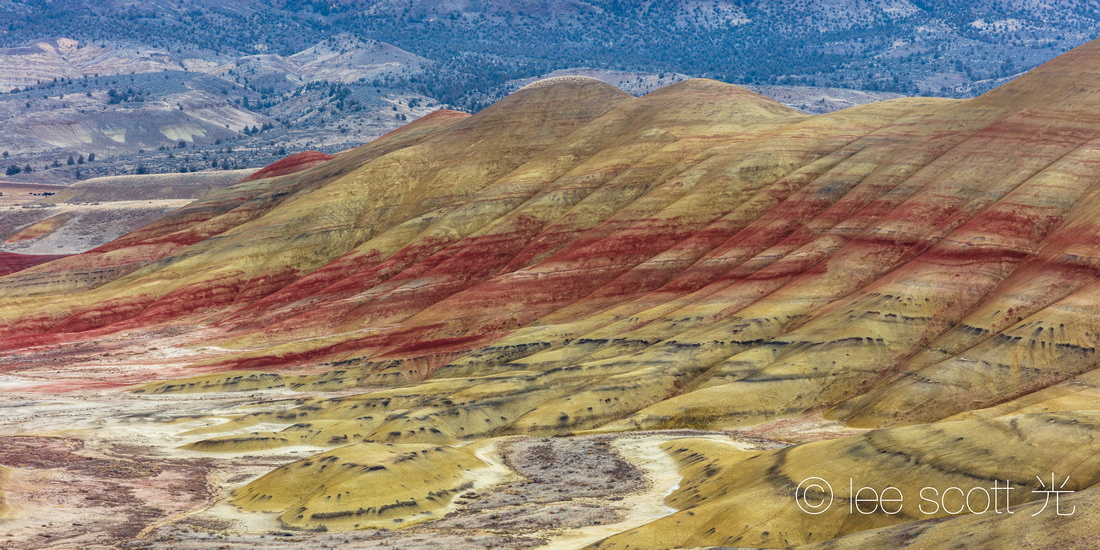 The forecast called for a snowstorm to hit the entire Cascade range around Christmas day so I escaped to the Painted Hills on Christmas Evee.

Here’s the sky that welcomed me to this magical landscape of colored stripes and gentle hills. 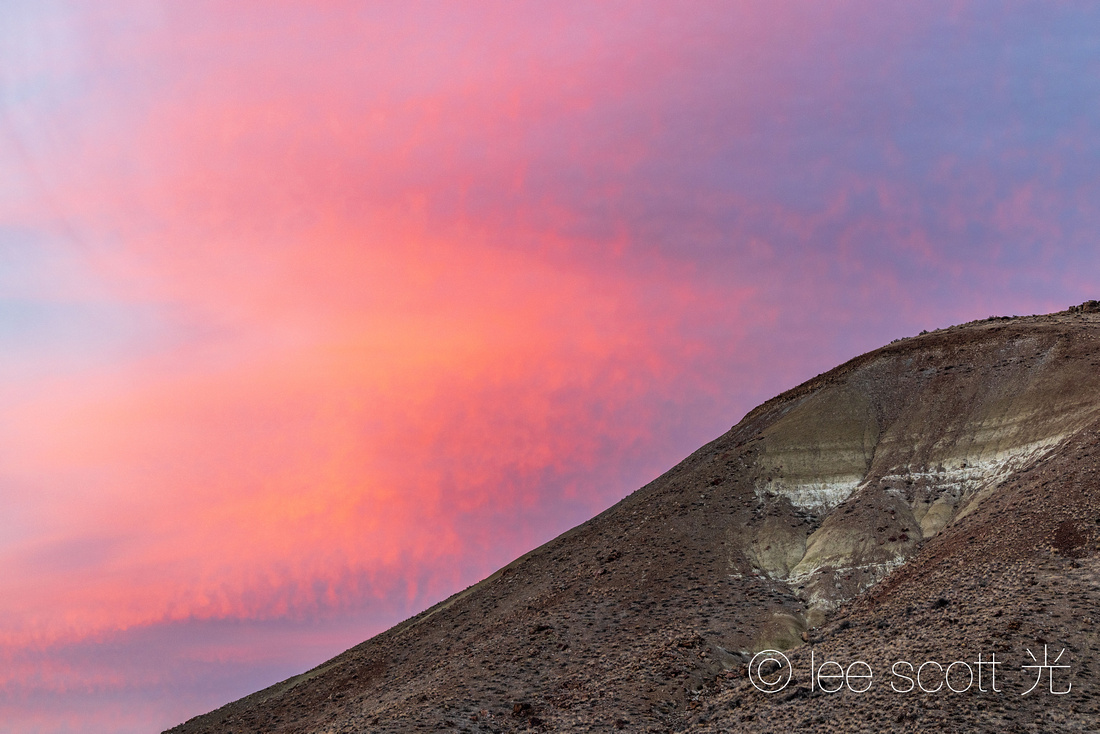 After the light show I searched for a campsite and found one off a dirt road at Priest Hole. It was right along a river and would make a peaceful place to welcome Saint Nic. I celebrate the season with a delicious dinner of Beyond Meat Italian sausage, spinach, tomato sauce, pasta, and one of the best beers of the trip-- Dark Reckoning Imperial Porter from Morgan Territory Brewing. 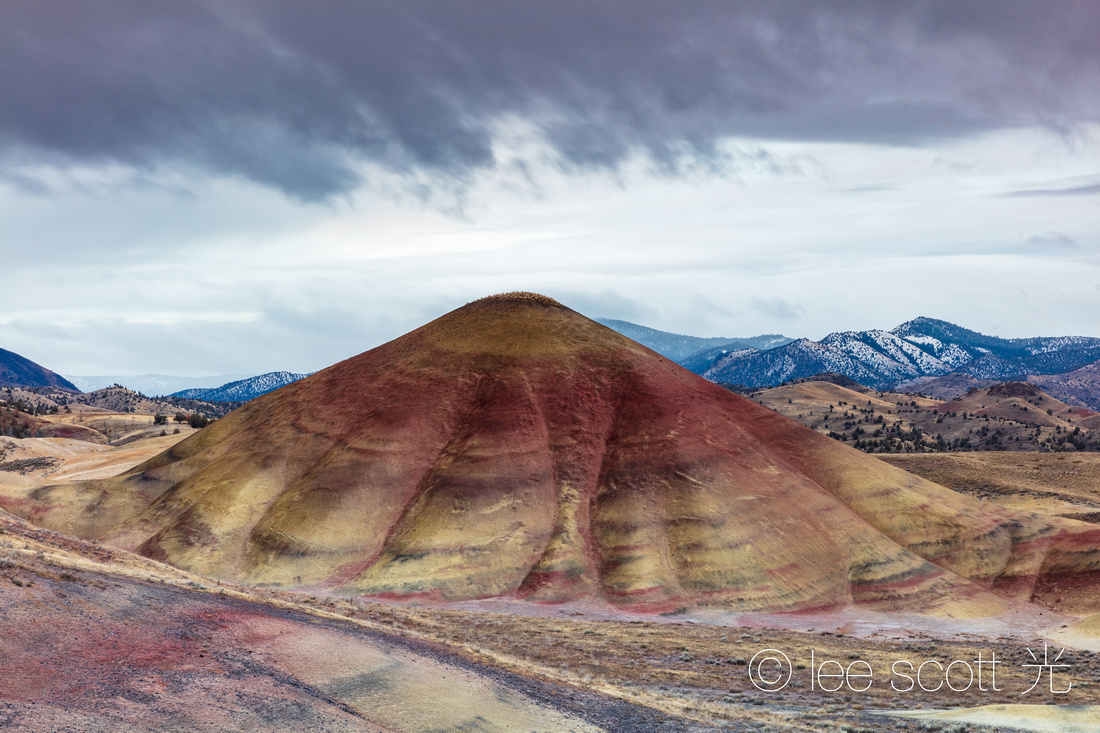 Christmas morning 2020. I’m standing on a hill in the dark, waiting for a sun that will not appear until the late afternoon. Clouds fill the sky above, and the gently rolling landscape slowly comes into view. The land awakes, and in the muted light of an overcast morning the badlands that surround me become filled in with color. Burgundy and beige. Soft browns and golden yellows. Hues that seem rich and sophisticated. 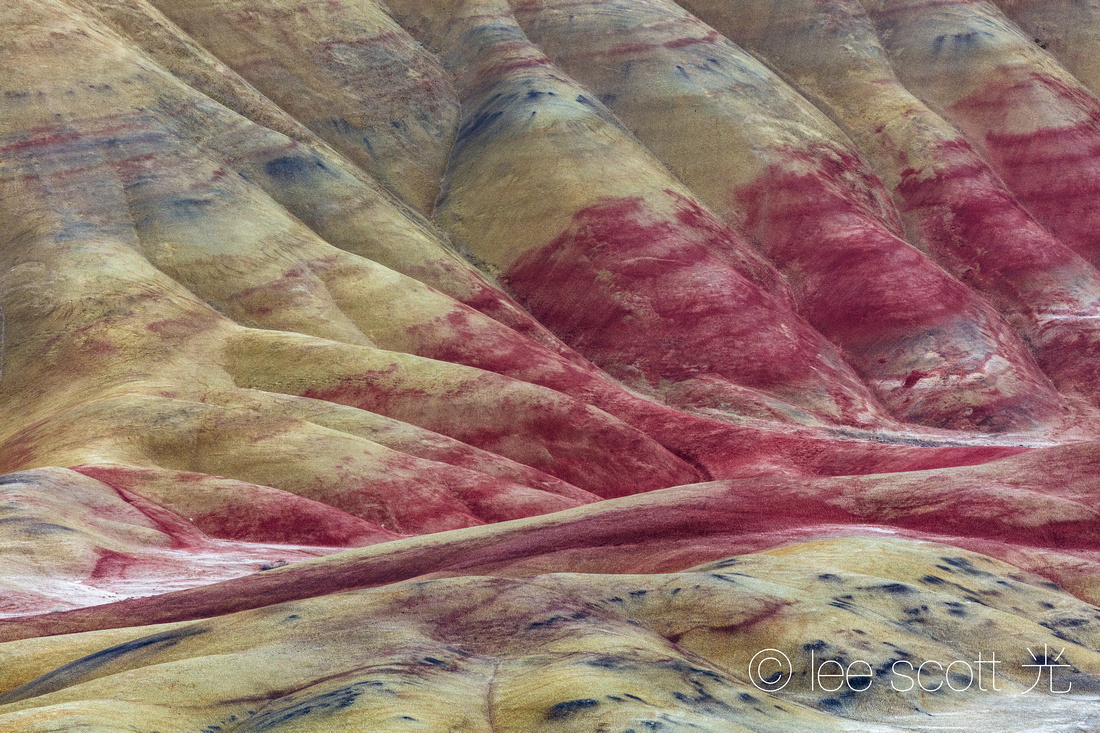 The Landscape is Patient and Calm, Holding Time and Mysteries in these Little Valleys of Painted Hills, Painted Hills National Monument, Oregon 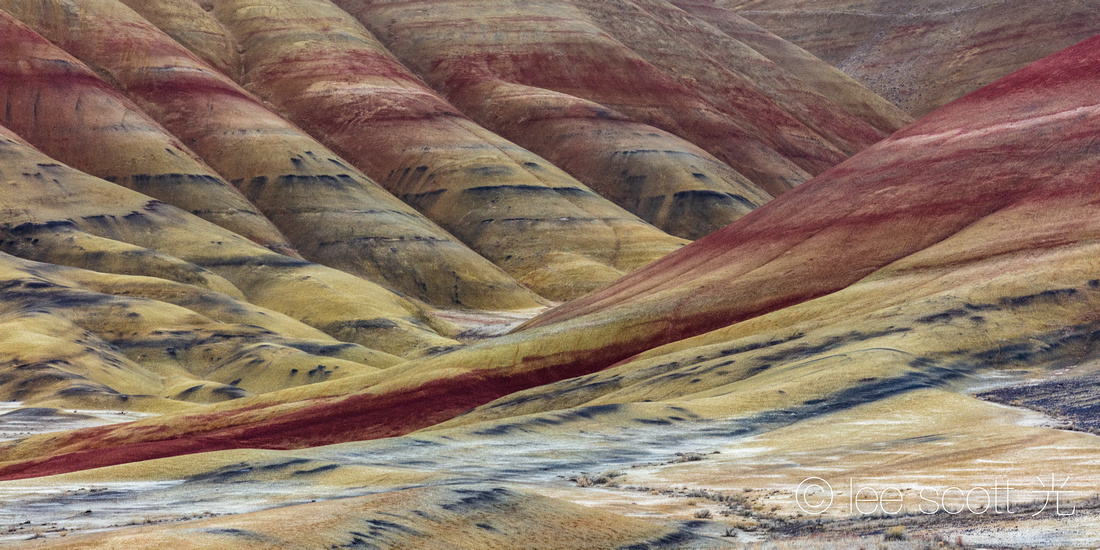 The Land is Wise and I Wish to Know Her, Painted Hills National Monument, Oregon

***
From where I am standing I can easily see a girl with a dog a little further up the hill. She has been sitting on the hillside since before I arrived, well before dawn. Who travels alone into nature on Christmas morning? We talk. She’s from the east coast and couldn’t travel home for the holidays so she decided to find solace. Out here. I hope she finds it. I hope, too, that the pandemic will end and all will feel safe to travel home. And all will feel safe to travel away. To places both far and near. May all beings be happy and free. 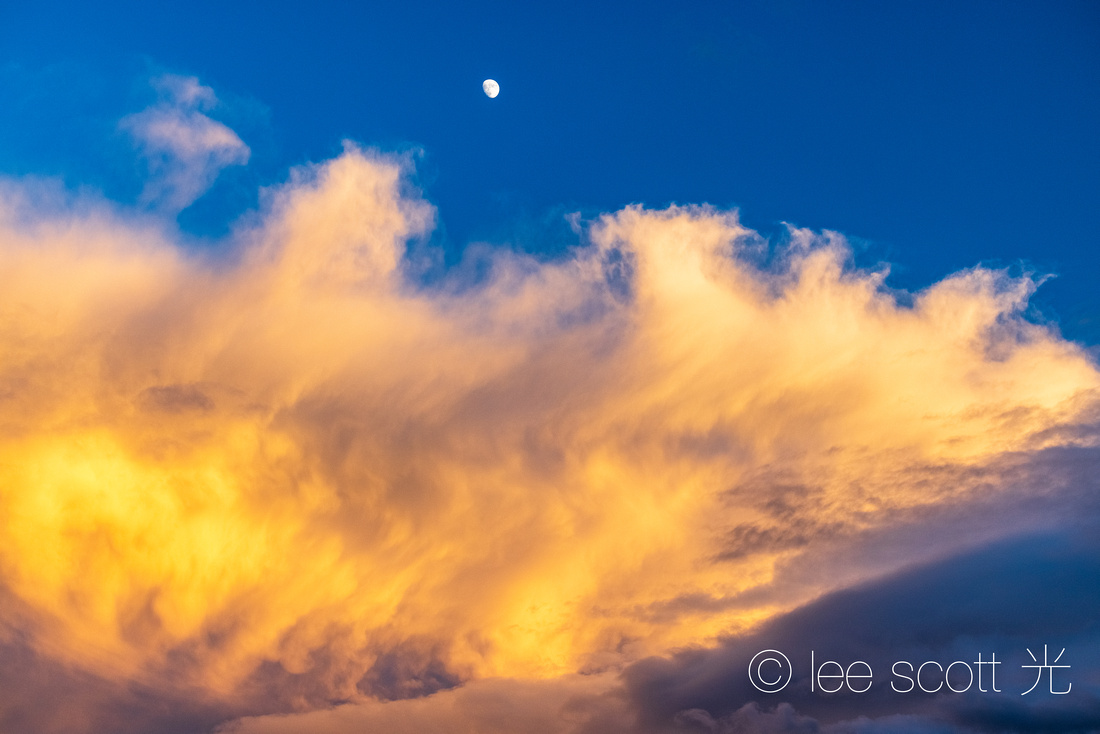 There was still quite a bit of snow on the mountain pass leading from the Painted Hills to Bend so I decided to hang around the John Day Fossil Bends National Monument a little while longer. I drove to the Sheep Rock District and hiked the Blue Basin Trail in the morning, returning to the Painted Hills late in the afternoon. 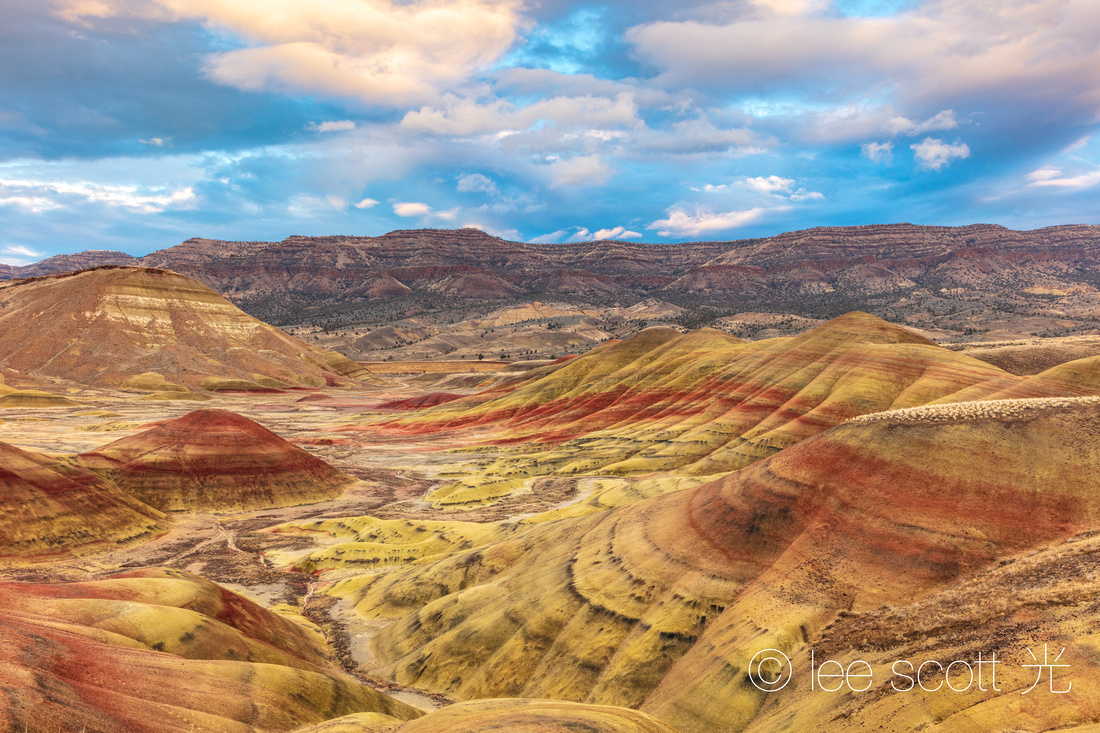 The Painted HillsI heard that there was still quite a bit of snow on the mountain pass so I decided to stay in the Painted Hills a little longer. I spent Christmas in this landscape, and later on Christmas Day I was presented with a gift of light as the clouds broke and the stripes in the hills shined.
John Day Fossil Beds National Monument, Oregon 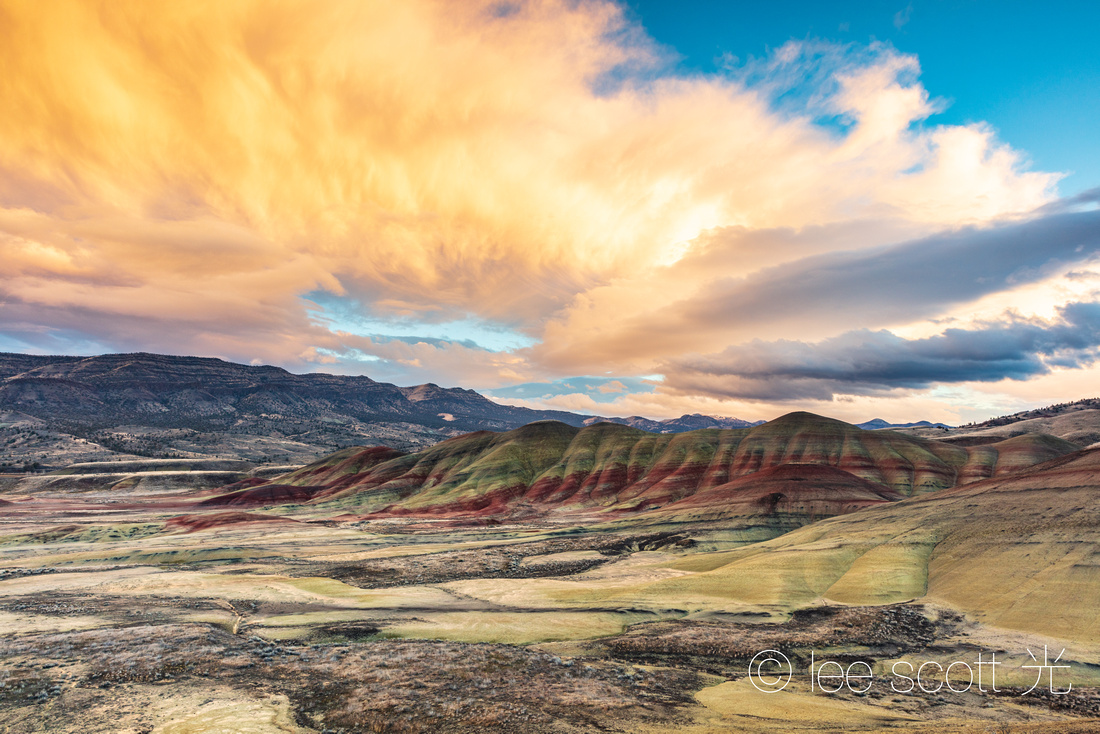 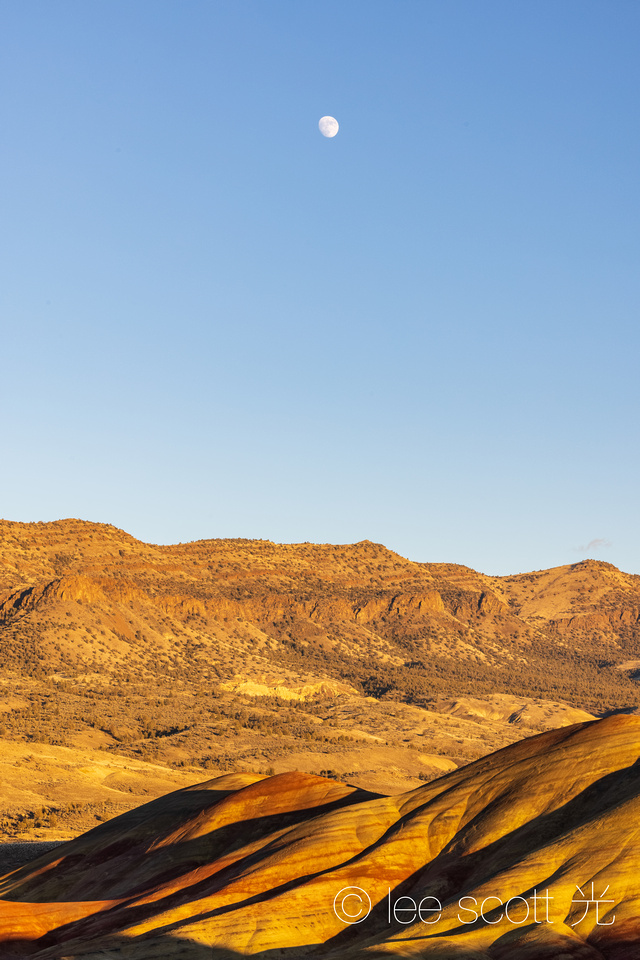 On my last day in the Painted Hills, the morning was one to remember. The heavens filled with pastels, delicate hues of pinks and blues spread across the sky. I watched in wonder, happy to be here. Happy to be in nature. Happy to see the sky change and the landscape come to life.

The picture above, To Talk with Mother Earth and Father Sky, is my favorite photograph from Oregon and one of my favorites from the entire 4 month trip. it is definitely top 5. For sure. I think it it 8 vertical photographs stitched together. I used a nodal slide to help keep the horizon line straight for maximum balance and resolution. There's so much that I like about this landscape: it's gentleness and flow, the many curves and elevations, the light and dark colors and the lines imbedded in the hills. The pastel sky of first light, too, helps to tie it all together. Yes, one of my favorites. 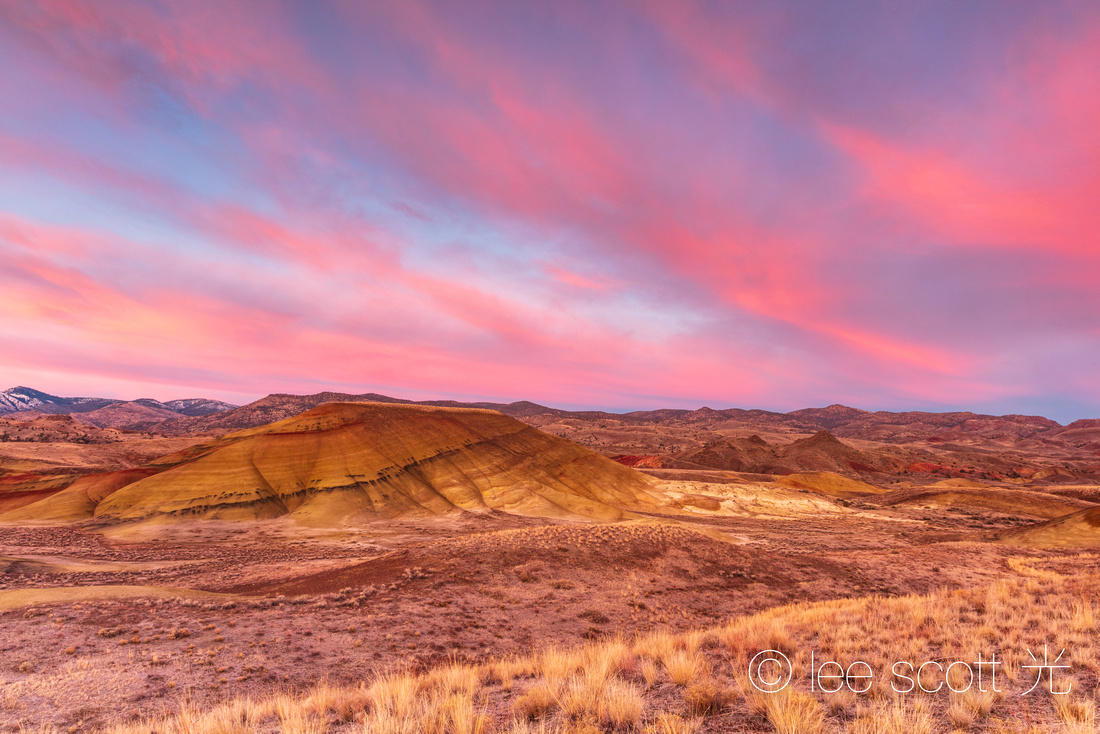 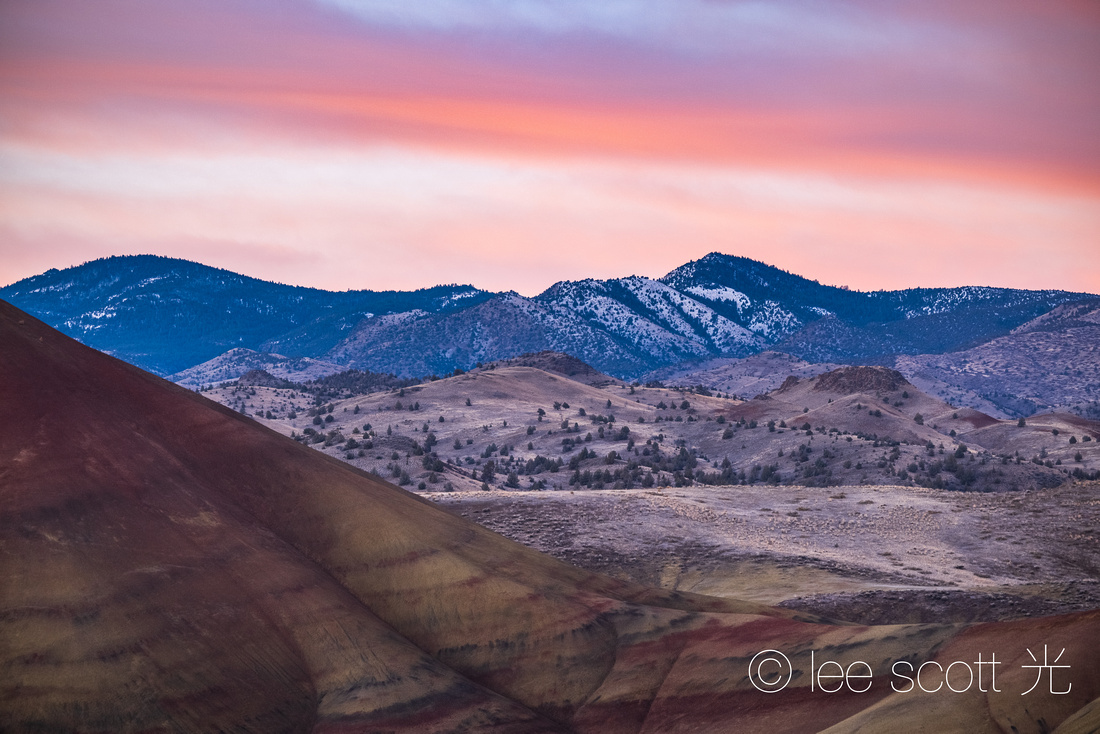 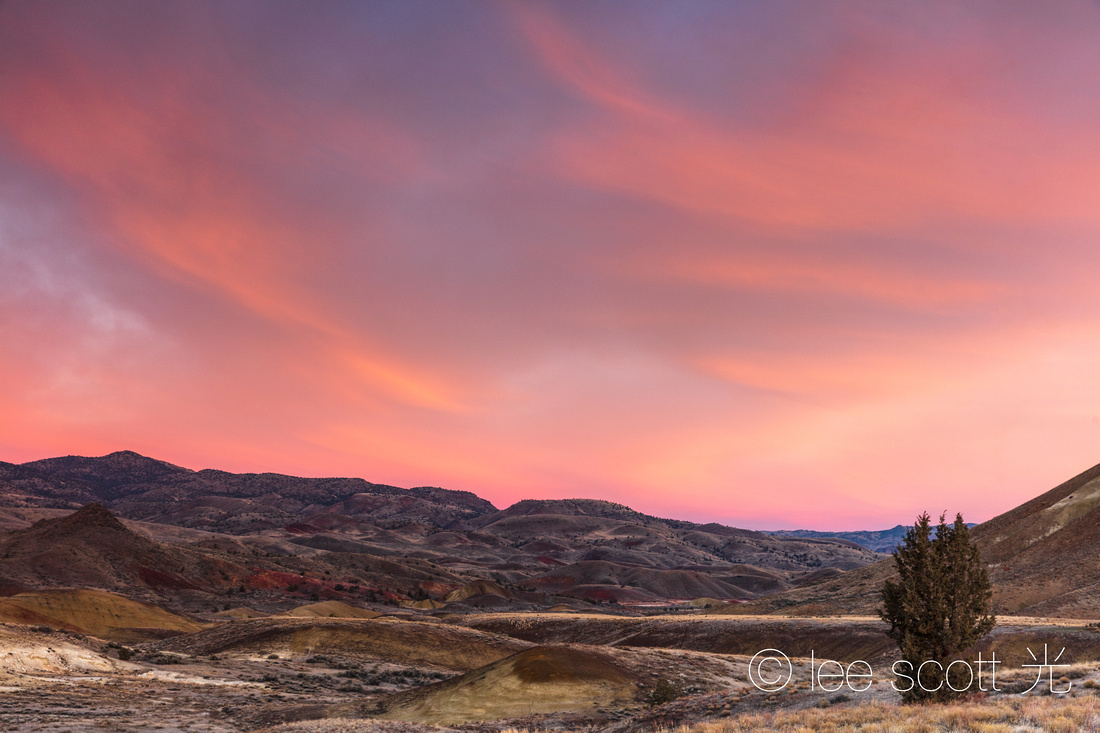 I left the Painted Hills and that amazing last sky and make my way south. While driving through Oregon down into northern eastern California I saw almost as many MAGA and Trump signs as I did Red Tailed Hawks. Needless to say, I stopped for the Hawks and not the signs.

This was back in late December so the November elections— and electoral qualms— were still fresh in everyone’s mind. Voter issues--ranging from fraud to count-- were in the public dialogue daily so at the time I could understand the prolonged support for the outgoing President. Fast forward to March and April and I’m driving through Florida, Tennessee, Louisiana, Texas, New Mexico, and Arkansas and I am still seeing Trump signs and flags. Some of the flags even had Trump’s face on Johnny Rambo! Those always made me take a second look just to make sure I wasn’t hallucinating. Keep in mind this was five months after the election, and three months since the current administration took office. 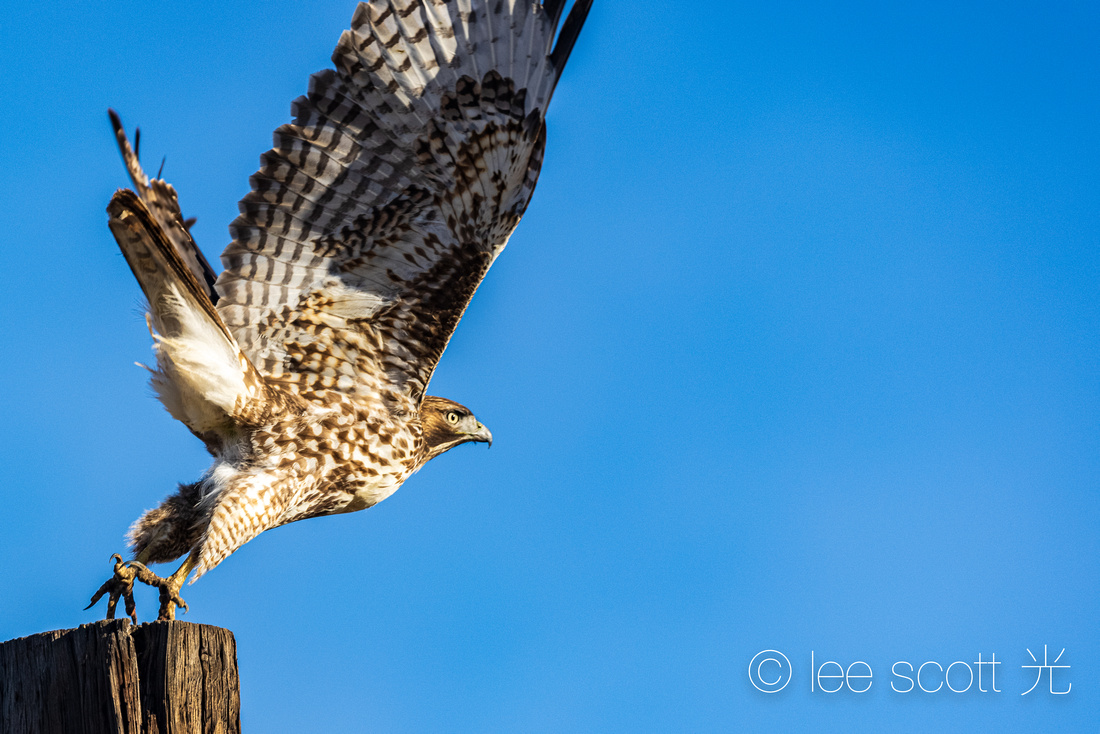 In my lifetime I have never seen a four year President retain such popular support. And after speaking with several people during the trip who believe that President Trump is the greatest President of their lifetimes, I am convinced that the 2024 elections will be just as interesting and important as the 2020 and 2016 elections were.

Sometimes I feel that living on Kauai I’m in a little bubble. But this road trip across the US— 18,000 miles and 23 states— showed me a lot. Or I guess I saw a lot and had a lot of time to think. About the land, the environment, the people, the politics, the news, the conversations I shared at cafes and campfires. America is a beautiful place. I just hope she’s not broken, but I think she may be. If she is indeed broken, as I suspect, I hope we can fix her. Together. Yes, I hope we can. 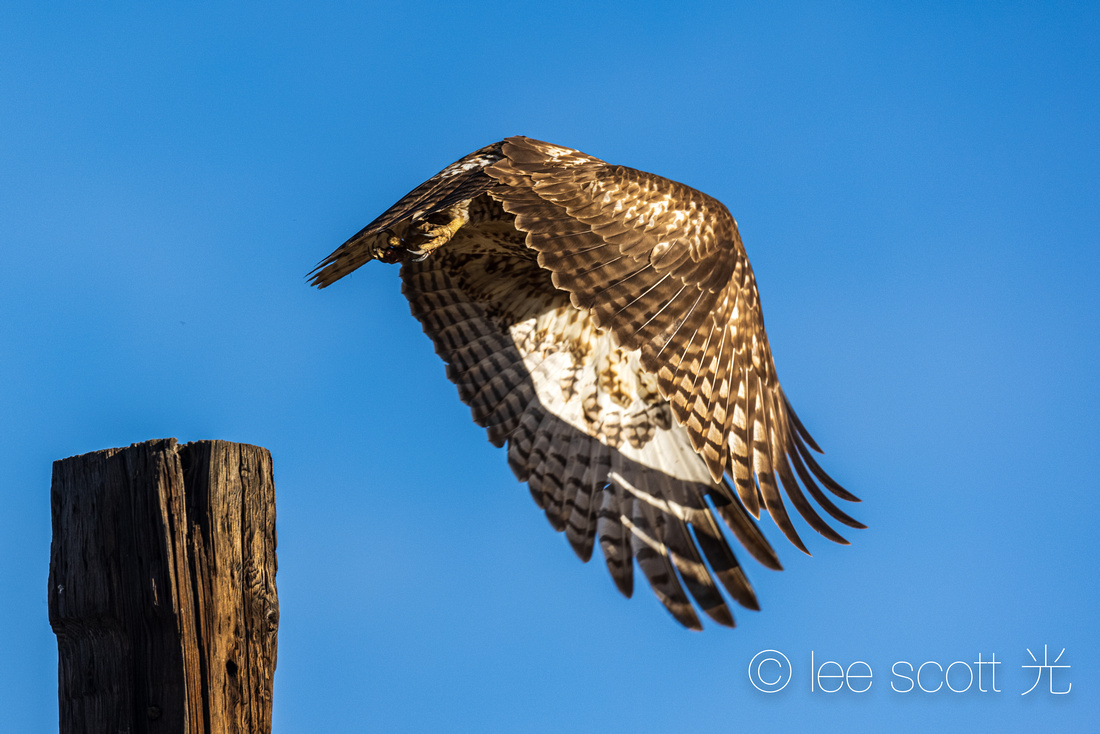 Fly Away with Wings Flapping, Oregon

Feel free to comment on any of these topics if you like. I will read each comment with the same respect in which it is written. We can agree and we can disagree. And both are OK because that's one way we can learn about each other.