From Oregon I return to California, where (eventually) I'll make it to the desert sand dunes of Death Valley National Park. But for now I'm full moon chasing across the cold country. I was supposed to be in Yosemite on my birthday, but my camp reservations were cancelled due to COVID protocols by the park service/state of California. So instead of Yosemite I went up to Crater Lake and Painted Hills. I camp in the Lassen National Forest under this full moon. 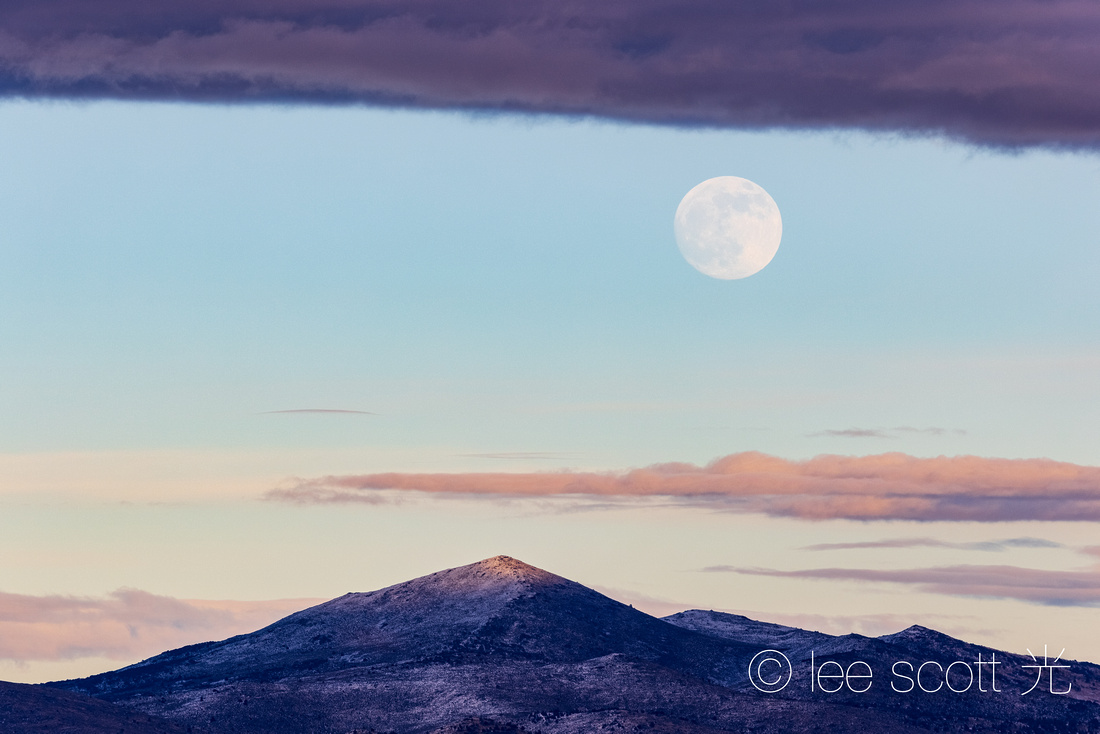 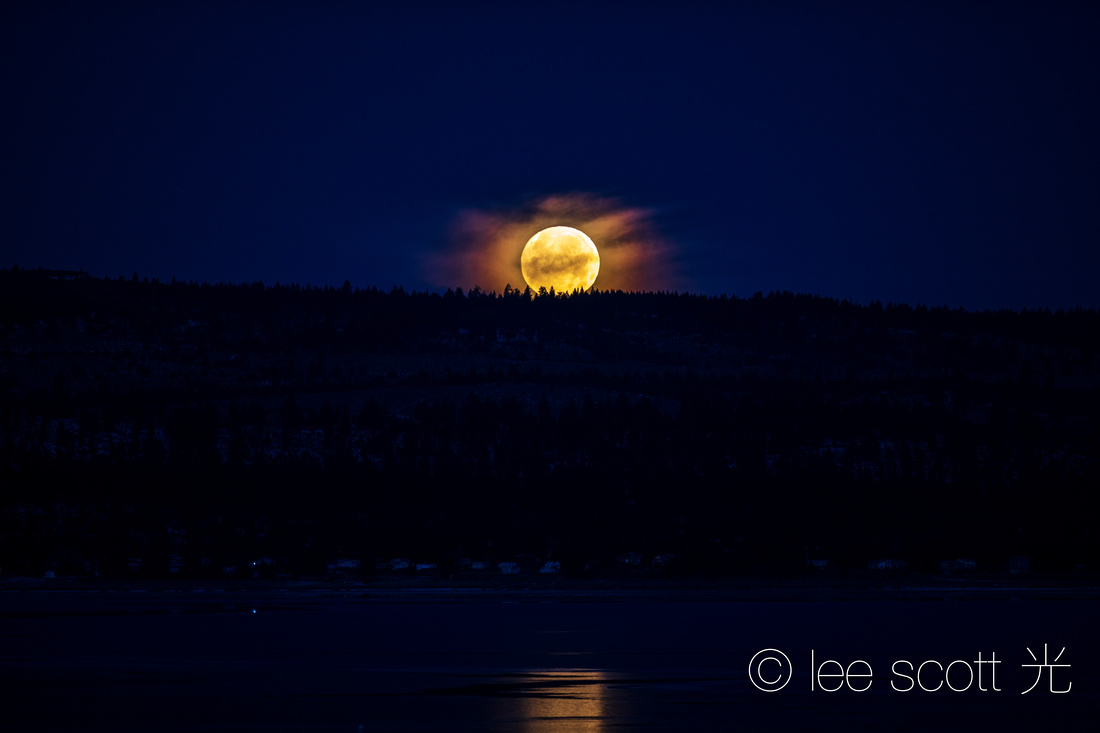 From the Lassen National Forest I'm making my way to the Alabama Hills. I knew before setting out on this photography trip I would need to be flexible. I often thought about what I heard in the Marine Corps— Semper Gumbi. It's a take on the Marine Corps motto-- Semper Fidelis or Always Faithful. Semper Gumbi means Always Flexible. It still makes me laugh... Anyway, I stopped alongside this frozen lake and photographed the moon as it was falling behind the hill where I camped on the crisp, dry snow the night before. 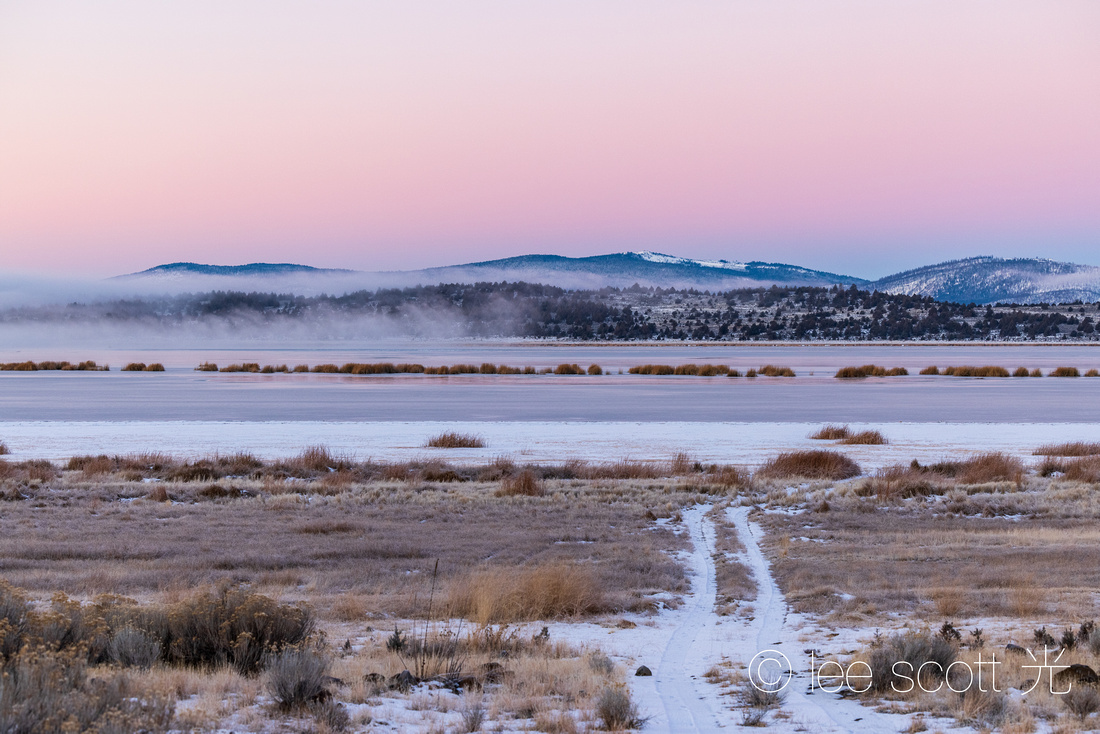 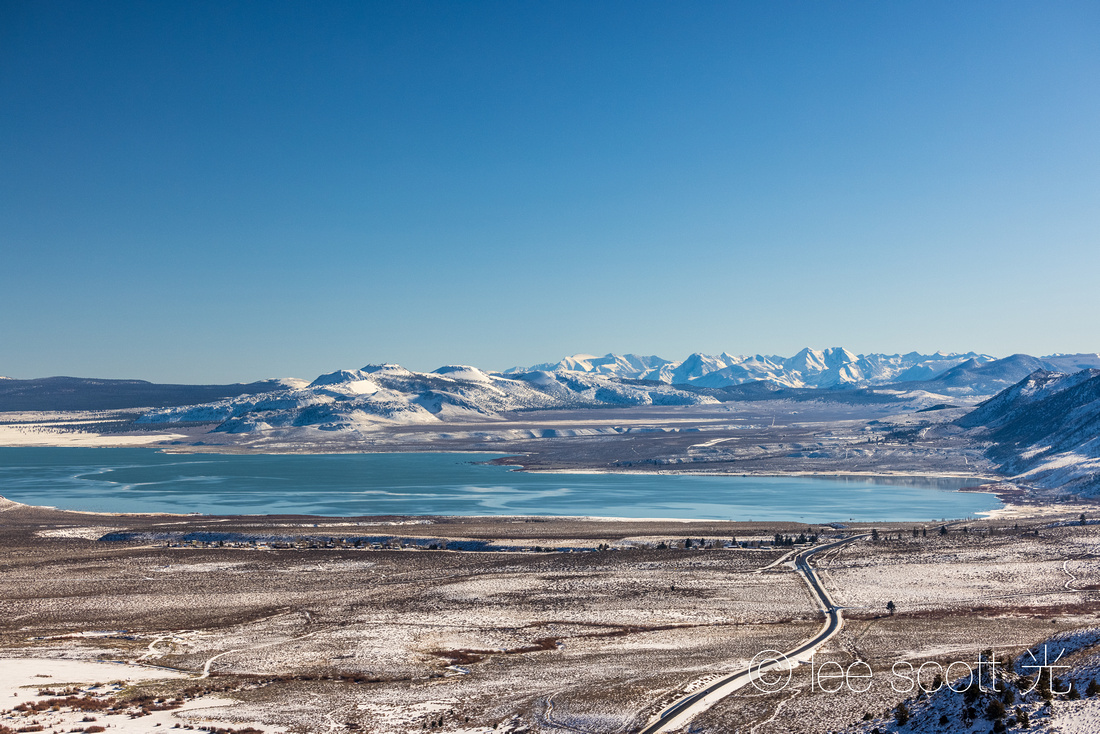 US Route 395 is one of the most scenic roads in America. The eastern Sierra Nevada and the adventure towns on the flats and foothills are truly spectacular. A photographer, hiker, climber, skier, nature lover of all kinds could spend a lifetime here, happily exploring. Some of my favorite places are Bishop, Lone Pine, the Alabama Hills, and the Ancient Bristlecone Pine Forest.

When traveling for a couple of months at a time the days and places run together. When I review the trip in my mind I tend to remember where I was with memories of the full and new moon. Full moon photographs with a new landscape, and stars on the new. On this trip I chased the full moon in Lone Pine, Grand Canyon, Nashville, and White Sands National Park. 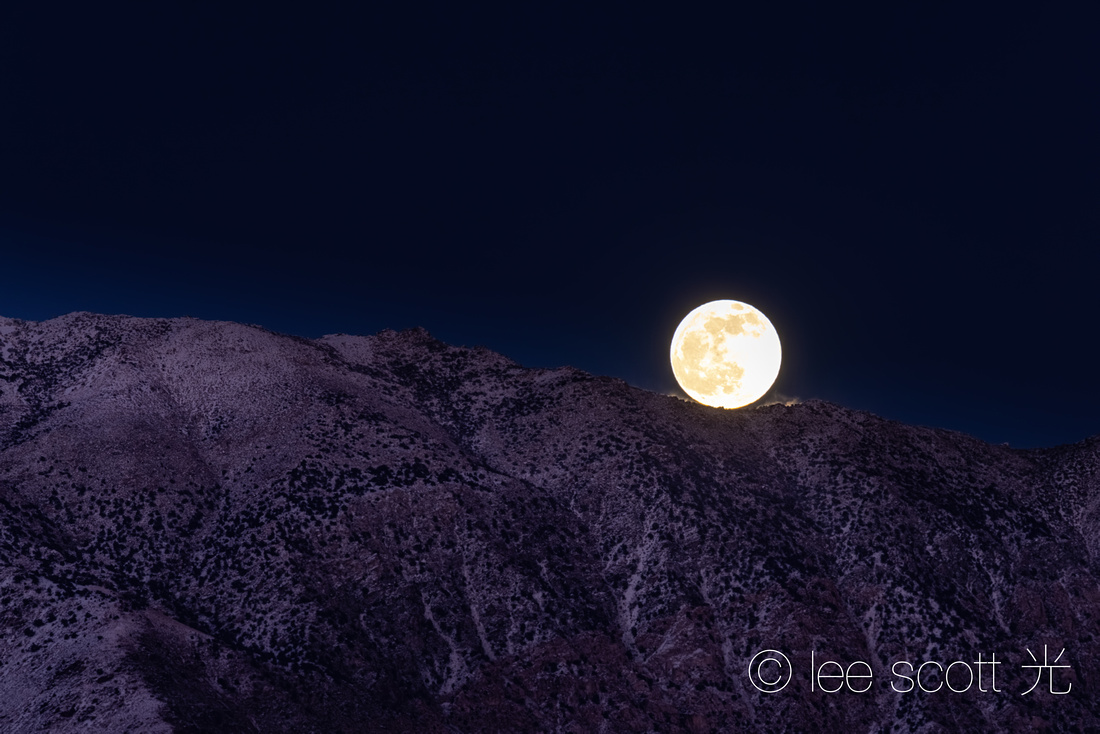 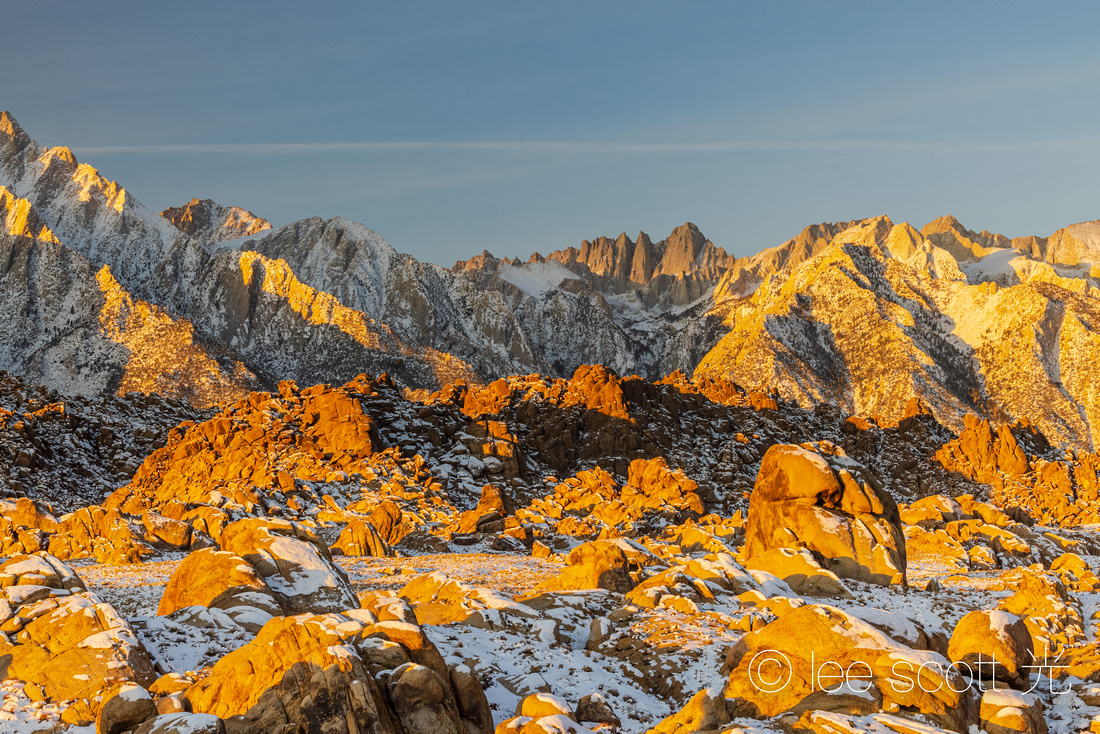 It's the first week in January and I heard that the road up the mountain to the Ancient Bristlecone Pine Forest was still open. This was surprising to me as I expected the road into the White Mountains to be completely impassable at this time of year. I had no idea how bad the road would be, but I decided to give it a try. I only encountered a few pockets of frozen snow on the shaded turns along the lower section of the pass. The upper portion was completely snow covered, but the gate wasn’t locked. In May 2016 or 17 I made it to this point, but was forced to turn back by a locked gate and a mountain of snow. This time I had better luck and was hesitant, but happy because I wanted to see the old trees that live up there.

As I climbed the mountain the snow became deeper and the corners became more than a little sketchy. I even rescued a Prius that had slid off the road on an icy curve. I would continue onto the Schulman Grove, but I decided that I wouldn’t stay long. Something about a road that climbs 9,000 feet without guardrails makes me more than a little cautious. 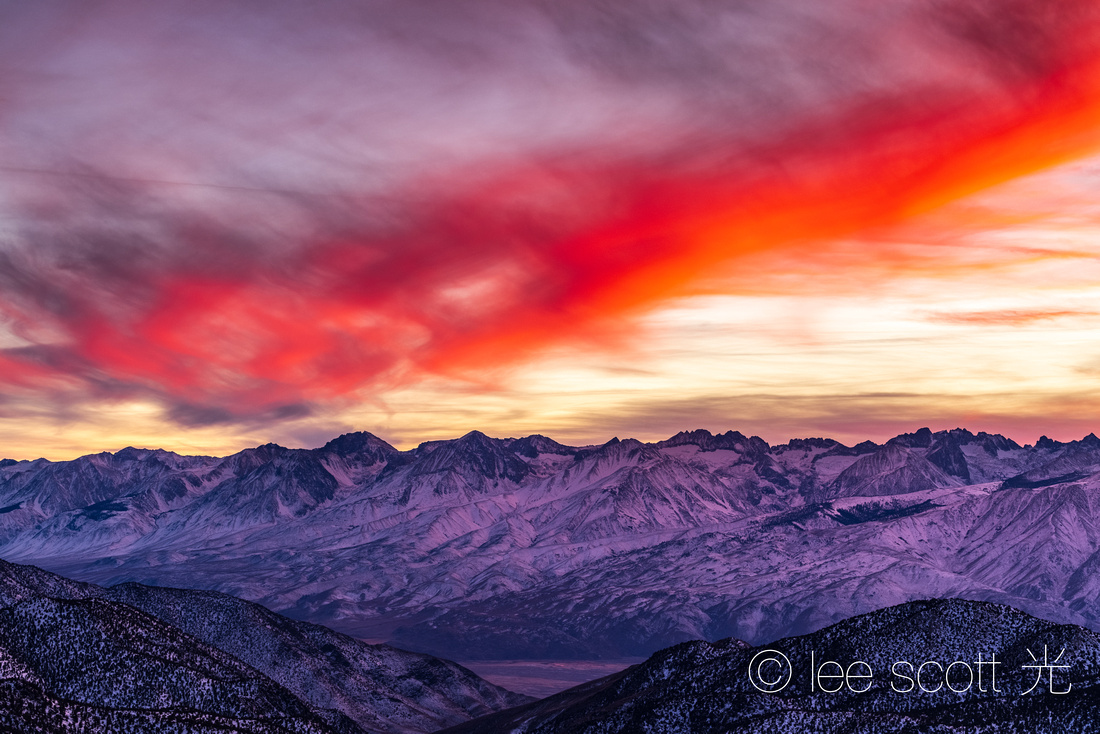 I am standing near the summit of a mountain pass and a song by Incubus plays in my mind. The refrain sings “...and I am happy...” Watching the light blaze through the winter sky I take in the warmth of the moment. I am full of happiness and gratitude. I am reminded— amidst this mountain scene—nay, by this mountain scene-- of my incredible smallness. Awesome is the power outside of me. Outside is a good place to be. 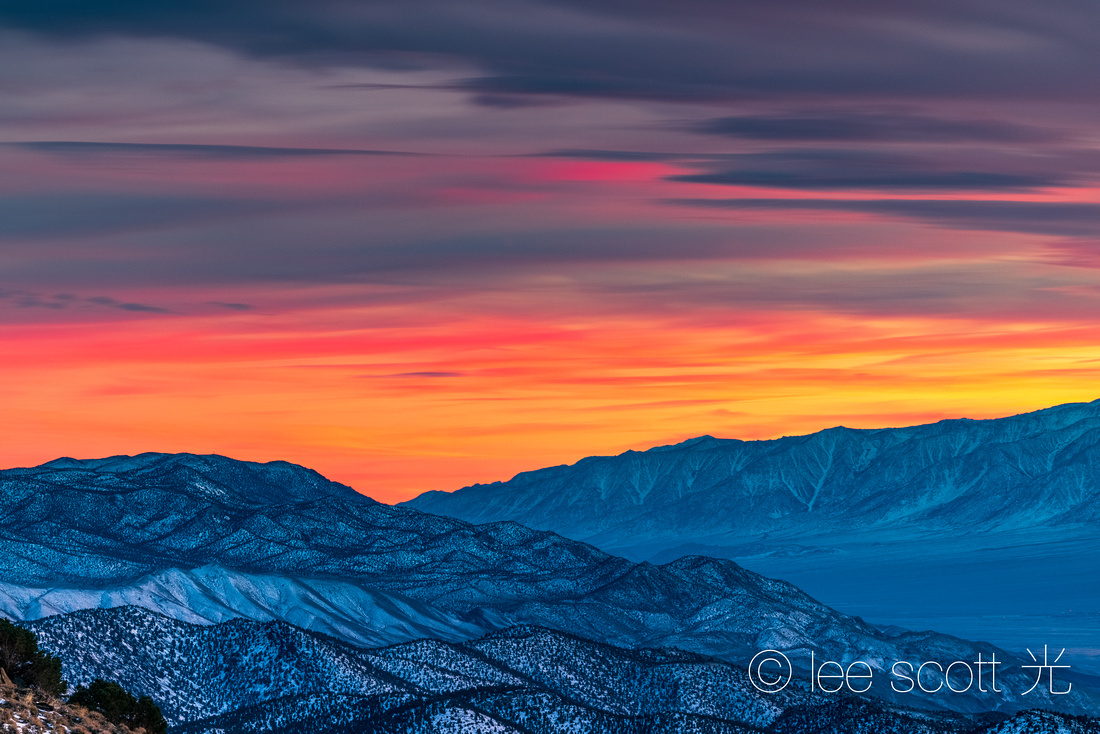 Some Sunsets are Hard to Walk Away From (Last Look for the Night), the Sierra Nevada Range, California

The light show continued the following morning as I descended the mountain and continued onto Death Valley Road. Leaving the Mountains of Light behind I felt a tinge of sorrow. It was such a beautiful place and one that I know so little about. New scenes and locations— especially ones as gigantic as the Sierra Nevada— are intimidating. Where to begin? What can I expect? How will it go? What lies hidden in the mountain and the valleys below? Daydreaming of explorations to come, I wind my way down one road and up another.

Soon Joshua Trees will be all around me and it will be clear that I have indeed left one place and have entered into another.

And in Death Valley I might as well be entering into another dimension. 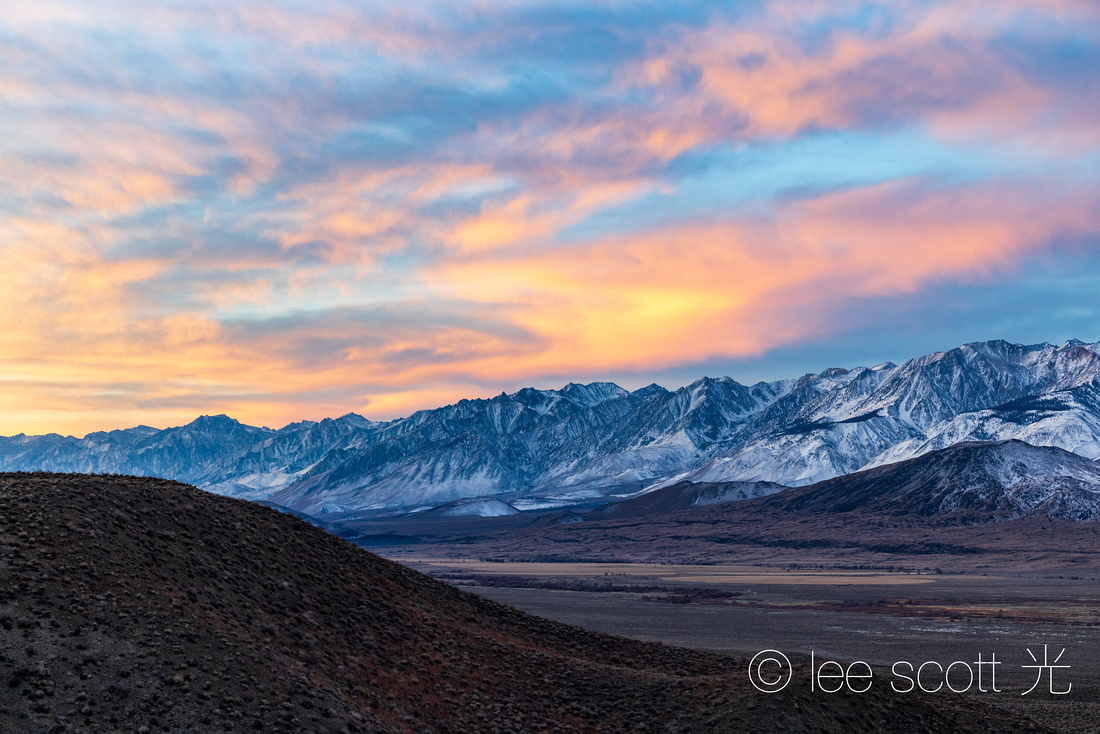 From the Mountains of Light to the Valley of Death (A Good Morning Drive), California