Chasing the Aurora, Looking to the Skies of Alaska 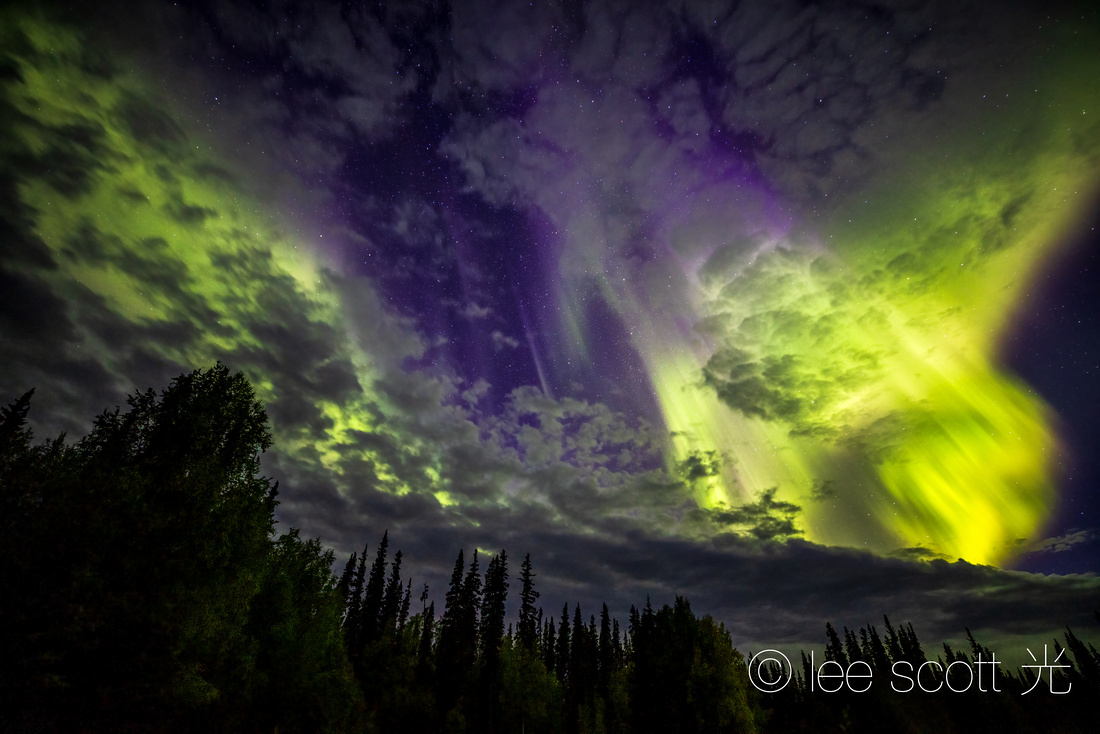 I just returned from an 18 day trip chasing the northern lights across the wild, beautiful, and very BIG state of Alaska. Our first night spent just outside Talkeetna gave us a glimpse of The Mountain. Our last night in a hotel in Anchorage gave us our first shower. In between we camped at Chena River State Recreation Area outside of Fairbanks; Tetlin National Wildlife Refuge about 8 miles from the Canadian border; Moon Lake State Recreation Area near Tok; various sites along the Dalton Highway; and finally Denali National Park. Throughout the entire trip It was a challenge finding clear skies, but we were able to catch the northern lights a few times and we even saw some wildlife during the day (when I wasn’t napping after staying up half the night looking at the Alaskan skies!). 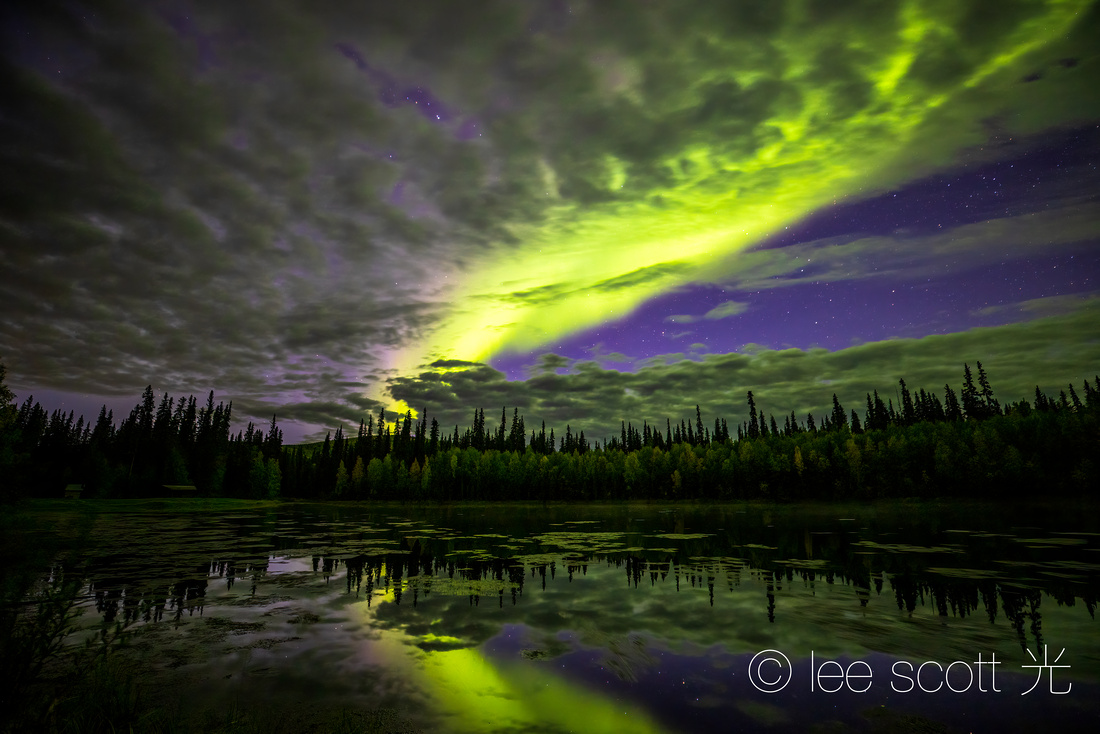 Clouds: We love ‘em at sunset. We love ‘em at sunrise. They hold the light in and, when conditions are right, clouds allow the sky to burn. But for the Northern Lights viewer, clouds are the enemy. You see, the aurora dance high in the sky. The aurora shine behind the clouds. So if there are clouds, it’s likely the cloud cover will block the light. Unless it’s a really strong display, or you get a clearing window, and the lights happen to dance through. On those cloudy nights, you just have to embrace the enemy, hold them with hope, or call it a night and go to sleep… 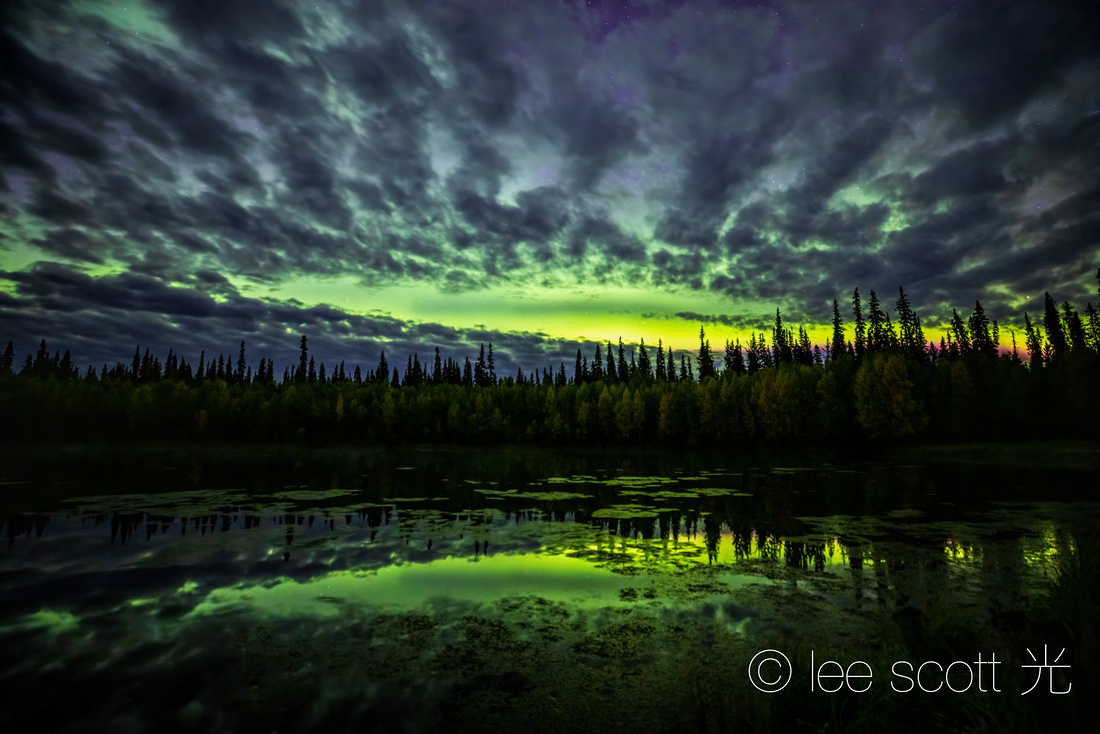 The first three nights were too cloudy to even try. But I tired anyway, and set my alarm for 1:30 AM one night only to be greeted with rain. And on the following night— the night with the strongest KP forecast of the entire trip— I sat with hope in my heart, only to see the clouds swallow the light at 11:30pm. I went to bed, and set my alarm for 3 am. I would try again…

While I set the alarm for 3 am,  I woke up at 2:28 because of the cold. It was cold that night then, too, I remembered. So cold that I couldn’t sleep on that night I saw the northern lights for the first time. It was so cold that I got out of the tent--  that night back in August 2016 when I saw the northern lights for the first time. Cold. Cold nights mean clear nights. Or at least clearer than it was when I went to bed. This could be good, I thought to myself as I unzipped the window of the roof top tent. I looked outside, towards the sky, and saw a green glow. "This is good", I said to Naomi. "It looks like it’s going off!" I hurriedly put on boots, jacket, puffy, big boy parka, gloves, and grab the camera and tripod. I set up at the waters edge and pointed the camera to the sky. I watched the lights dance in a rhythm akin to the gods. Yes, gods. These displays of light were Gods of the Alaskan Night. 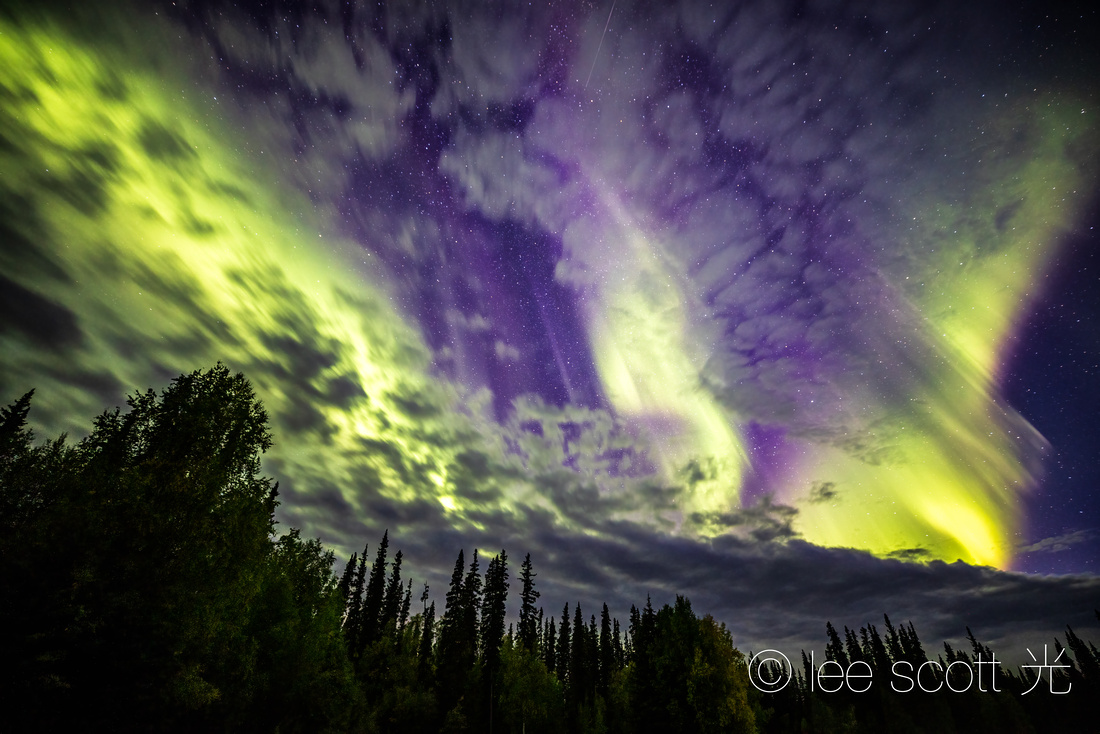 Going to bed with wonder in my eyes, I fall asleep not knowing what is a dream and what is real. This is the effect of the aurora. It makes you question what is real. It fills you with wonder. It leaves you wanting to see her dance again and again. I open my eyes the next morning to heavy clouds and a forecast that looks bleak for the Fairbanks area. So we decide to break camp and go into town for lunch and research.

I primarily used the Aurora app, ExploreFairbanks.com, the Aurora forecast from the University of Alaska, and the weather app on my iPone to research KP forecasts, viewing probability, cloud cover and nighttime weather forecasts for a few select locations in interior Alaska. After consulting with these various apps and websites over coffee, we decided to drive towards the Canadian border and the Yukon Territory, hoping that we would find a north facing campsite on a body of water. One of the shots that I envisioned before traveling to Alaska was the aurora and reflection. I felt like I came close the night before, but wanted a more balanced composition, one that evoked a sense of wonder balanced by calm. 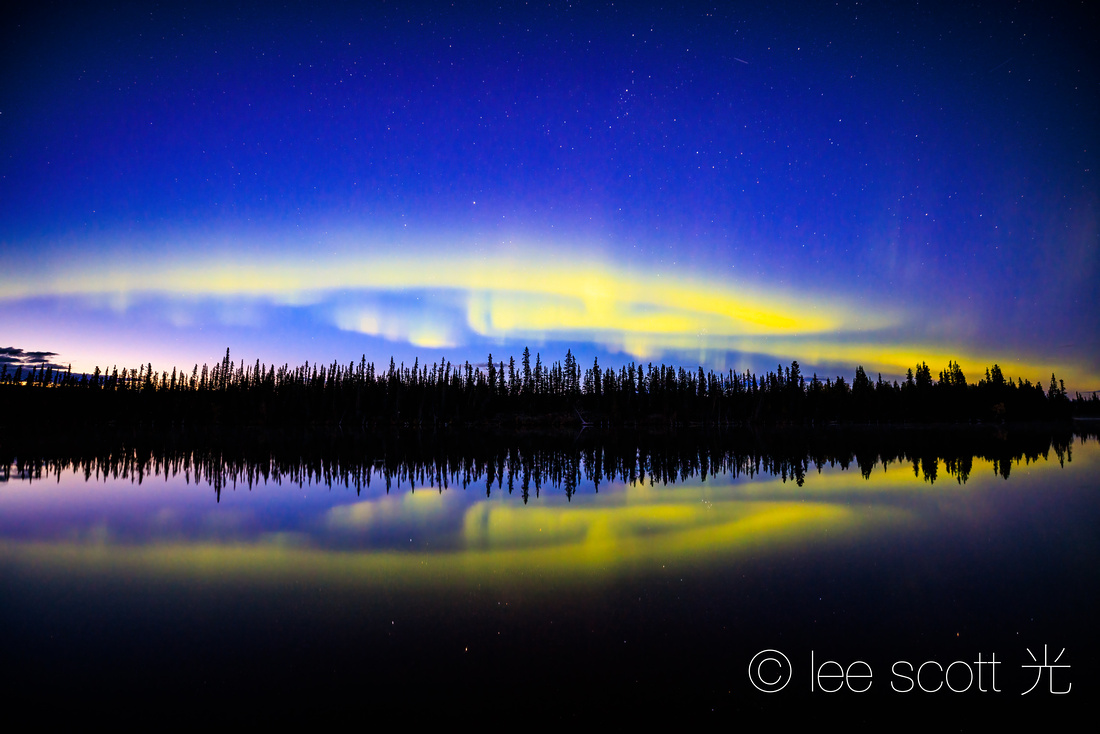 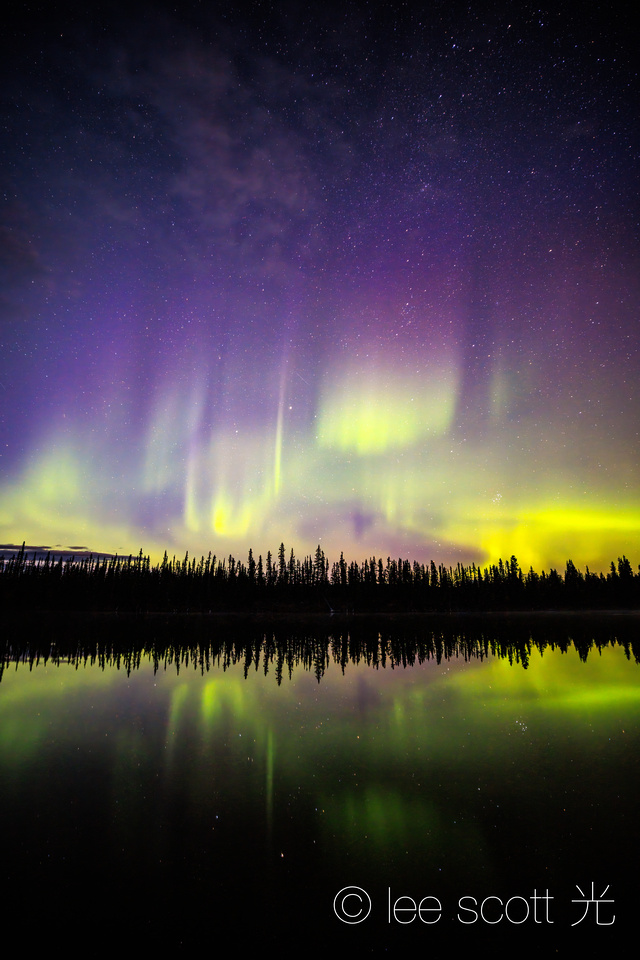 To view on a full moon or not to view on a full moon. That is the question. There’s different ideas as to whether or not the full moon should be avoided when chasing the northern lights. One side believes that the light of the full moon interferes with one’s ability to see the aurora. Another side believes that while the light of the full moon may inhibit the eye’s ability to pick up the aurora, the camera is unaffected or just slightly affected by the moon’s light. And for pictures, some think that it may be good to have part of the landscape illuminated— especially if there is no snow to brighten the scene with reflected light. I decided to chase the aurora a few nights before the full moon and a few nights after. But I had the added advantage of a few days when the moon was approaching full phase but would remain below the horizon because of the extreme northern latitude of our location. So this would give me a few dark nights and a few bright ones. Here are a few photos from when the moon was out, but remained low along the horizon nearly all night long. 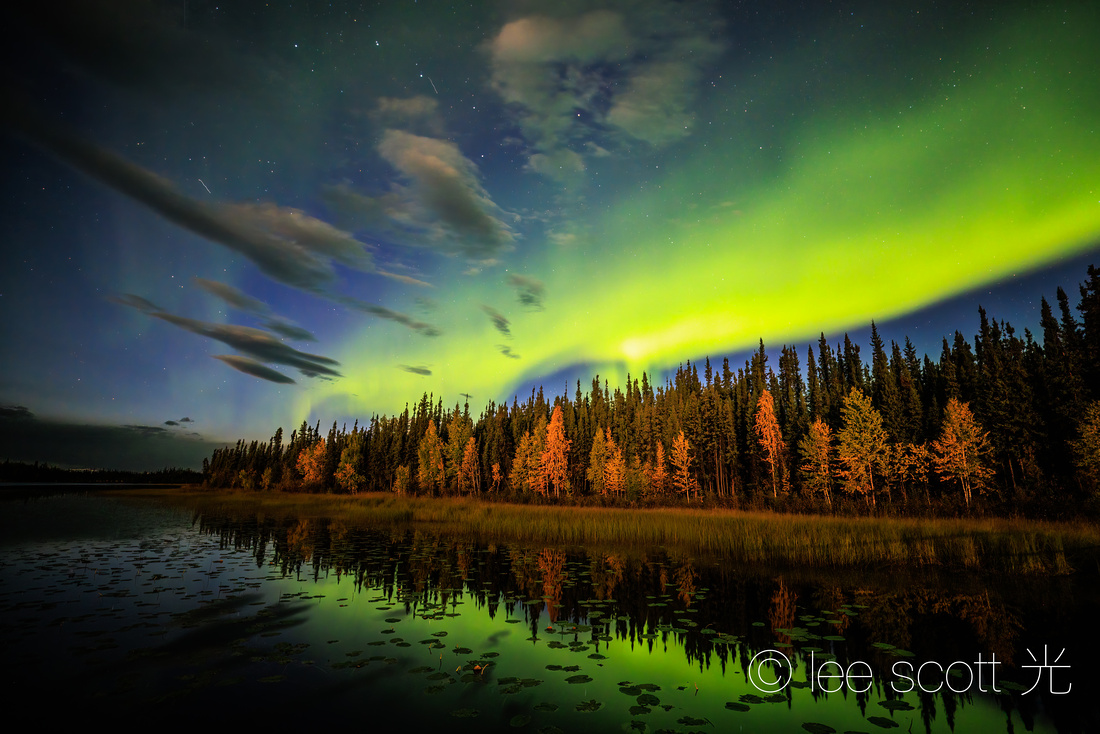 Staying Up Late on a Near Full MoonTetlin National Wildlife Refuge, Alaska

Staying Up Late on a Near Full Moon, Tetlin National Wildlife Refuge, Alaska 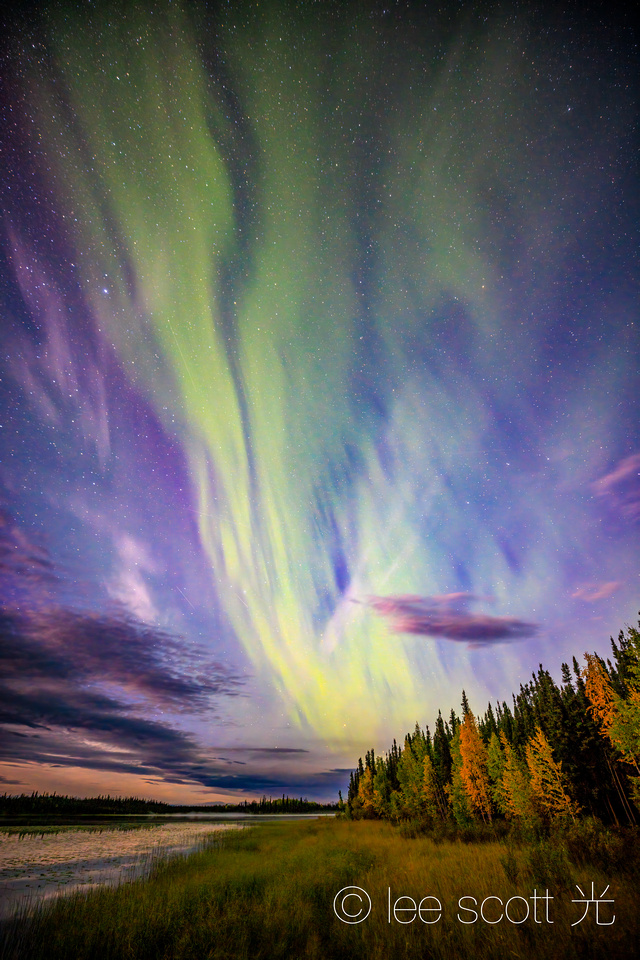 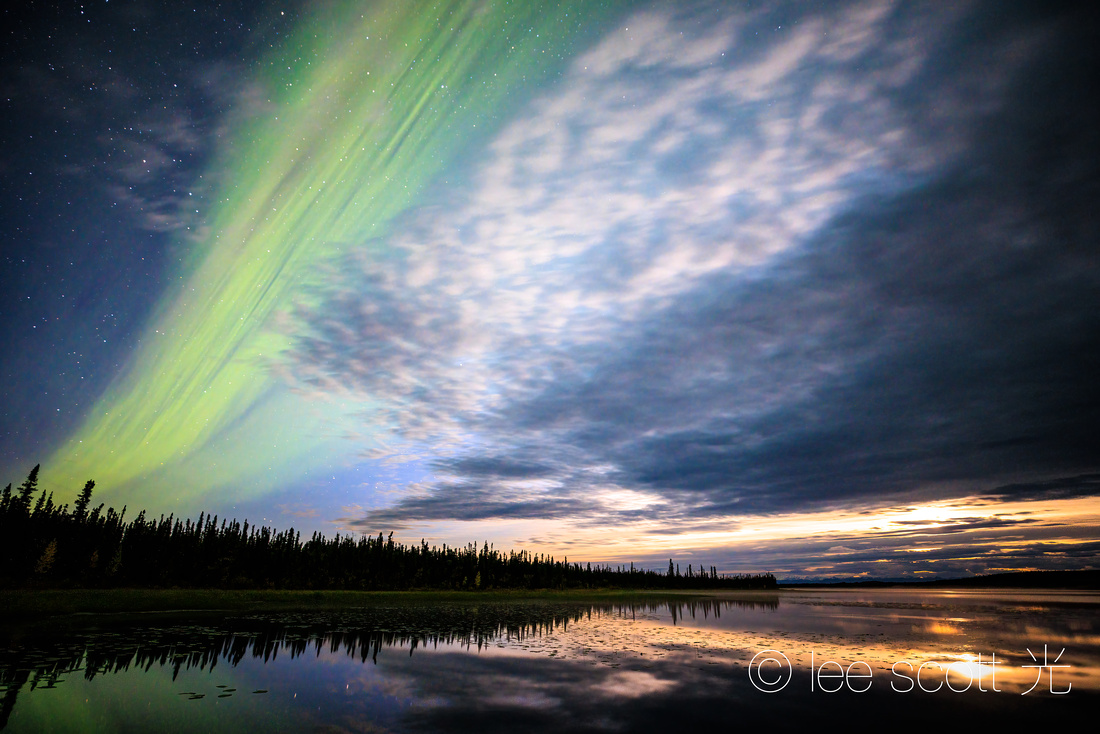 Did I Dream This?, Tetlin National Wildlife Refuge, Alaska

We retraced our steps and camped at a familiar spot on our way back to Fairbanks. Stayed up with the flames of our campfire and enjoyed hot chocolate and snacks while we waited for the light show to begin. And when it did it was all business. It was Just click, click, clicking away. Nature is awesome.

The Arctic Circle. An imaginary line on the top of the world. 66 33. Maps mark it. A sign says you are there. But other than that it looks pretty much the same as anywhere else. Except it’s at this imaginary line where magic happens. Or at least it happened for us. Around 2 am a line of vertical light appeared in the middle of the sky. It was like a knife edge cutting into the darkness of night. And from the slit, from that thin hole in the sky, the aurora entered the Arctic Circle, that imaginary line where we stood. For 27 minutes— from 2:02 to 2:29 she danced. And JOY is the only word that I have to describe it. Her performance was joyful. The sky was full of joy. I danced with her. Joyful. Smiling. Dancing. Jumping. Just pure, ecstatic joy that night at The Arctic Circle, that imaginary place of unimaginable, yet somehow very very real, joy. 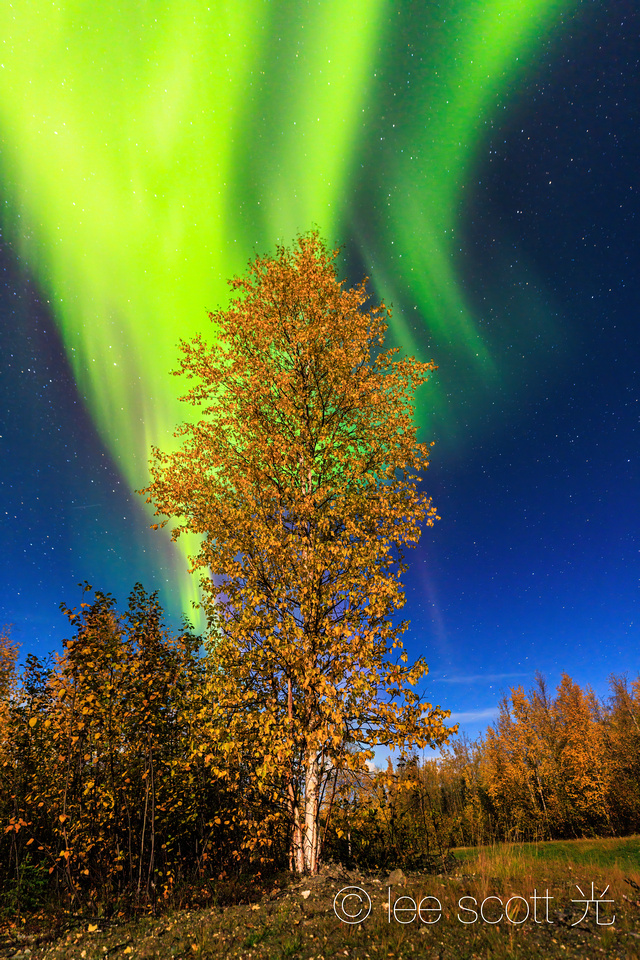 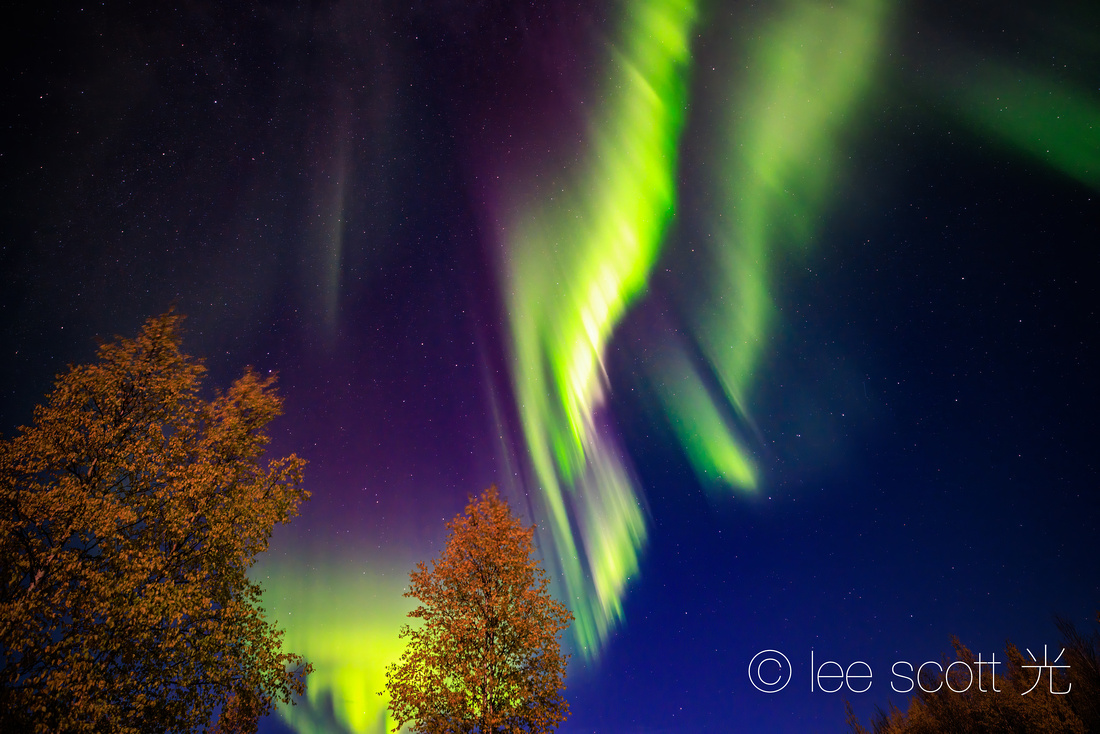 And She Danced. That Night, She DancedThe Arctic Circle, Alaska

And She Danced. That Night, She Danced, The Arctic Circle, Alaska

It was as if we were in a great amphitheater and the lights danced all around us. Like keys being hit on a xylophone the colors jumped green, white, purple, green all up and down the night scale. We looked on in wonder. Mouths agape and smiling. We looked at one another with joyful eyes, as if to say, “Can you believe this!???” 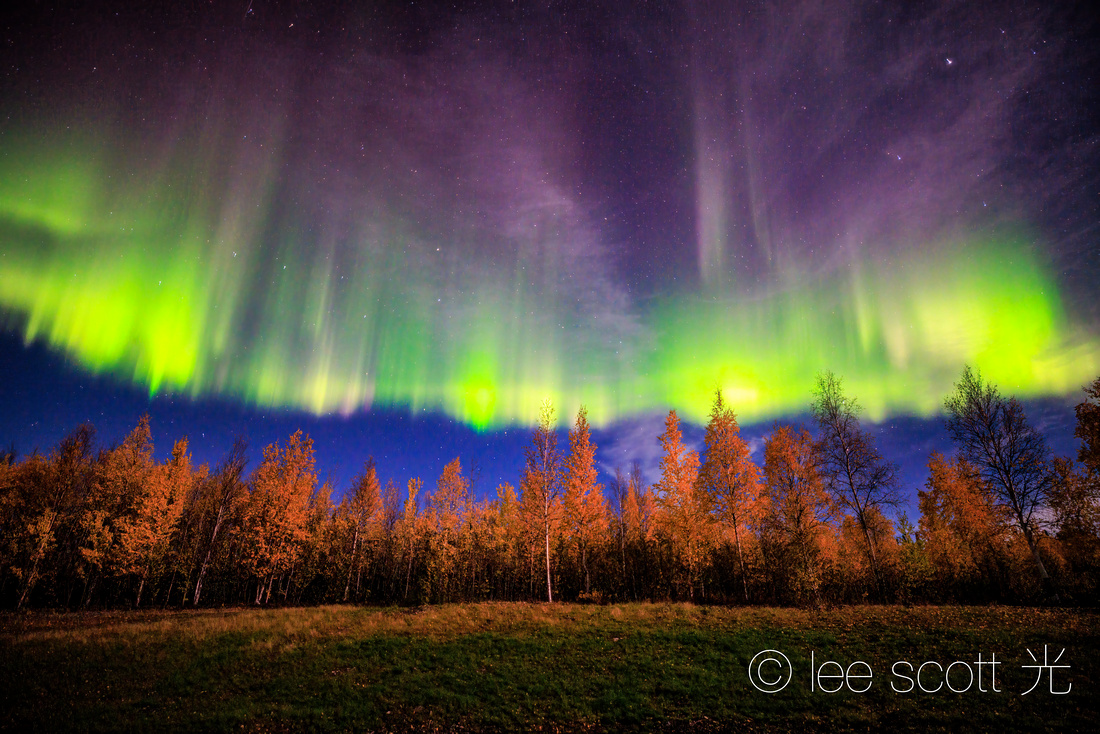 The road continues north and north we go, leaving this crazy night behind we drive on wondering if it was all a dream. The drive takes us over mountains of the Brooks Range and ends at a river bed in Happy Valley where we watched a momma grizzly bear and cub cross down river about a 100 yards away from our camp. Before bed we thanked the animals we saw that day: thank you red fox; thank you moose; thank you golden eagle; thank you musk ox; thank you grizzly bear; thank you little cub. And we thanked all the animals that saw us only we just didn’t see them: thank you to all of the unknowns and unseens 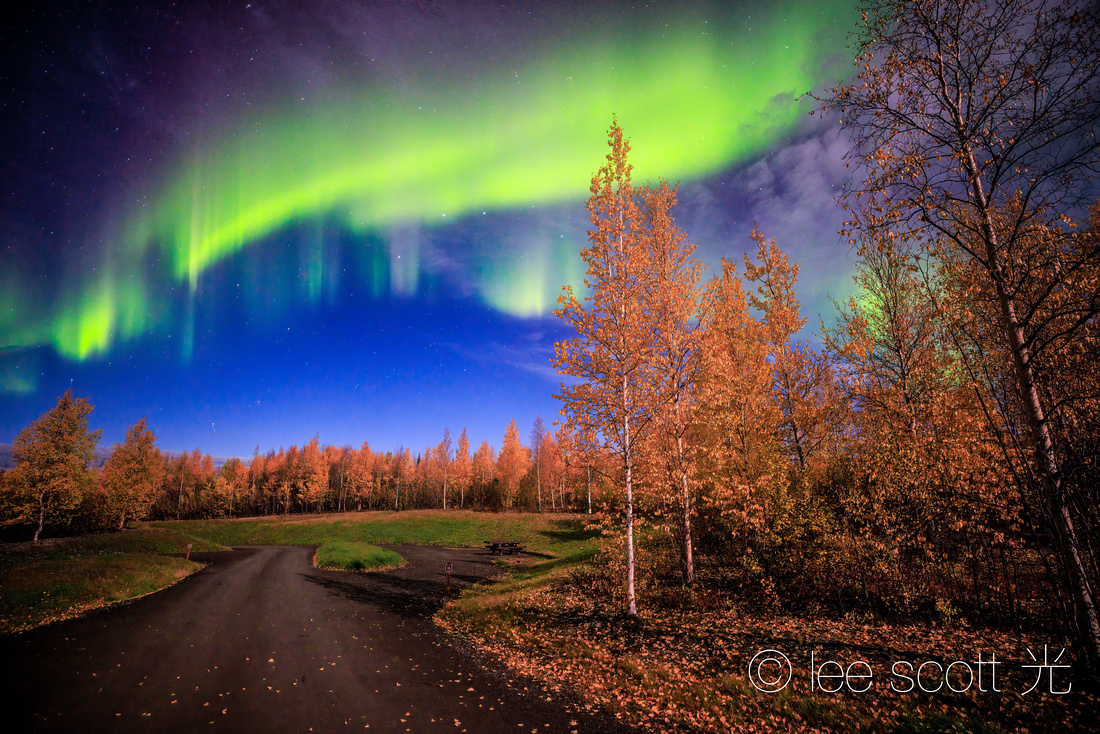 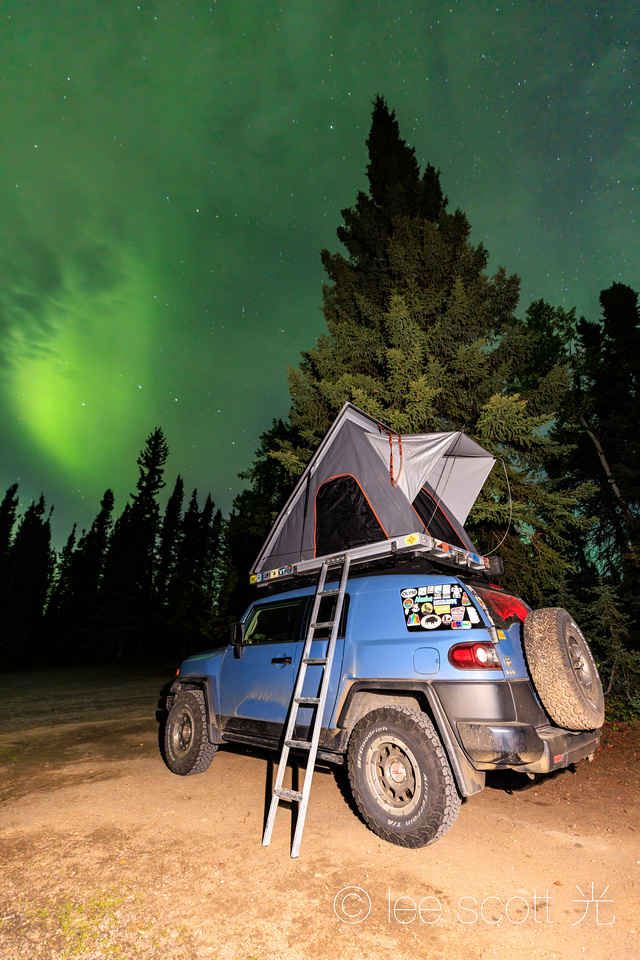 Campgrounds of the Trip

The Arctic Circle, The Dalton Highway