The Curfew is Over

This morning, Tuesday May 6, 2020 the nightly curfew on Kauai expired. The nightly curfew? You ask. Yes, the government of Kauai enacted and enforced a nightly curfew from 9pm to 5am to combat the spread of the Coronavirus and to avoid overburdening the island's first responders. But now that curfew has been lifted so let's celebrate FREEDOM! with 10 images that were either taken between 9pm and 5am or where made possible by traveling during this period of darkness. I must be clear that none of this photographs were taken during the time of the curfew itself. These are all older images from the archives. Rest assured, during the time of the curfew I was at home watching Netflix, drinking beer, playing with the cats or cards or sleeping. :-) 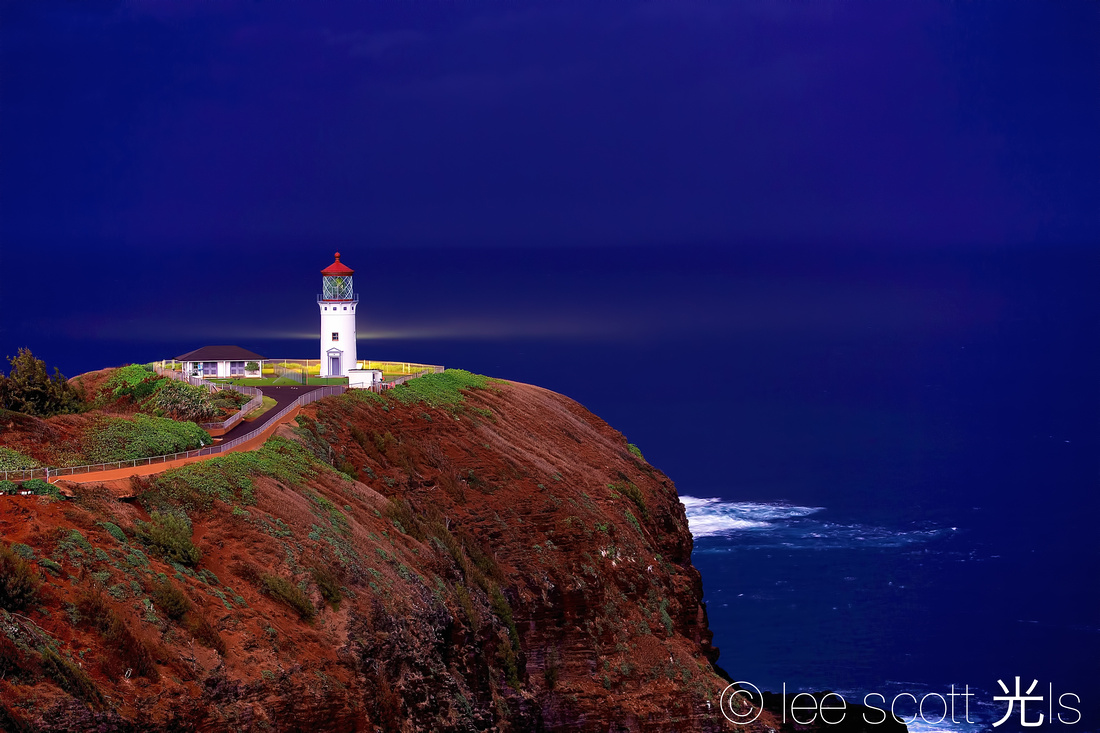 In the Light of LightningThis shot was particularly challenging as it was taken at 8.45 pm with no artificial lighting-- except for the beacon, which shines behind the kilauea lighthouse. All of the other light in this photo comes from three lightning flashes over one 25 second exposure...
I went out the intention of photographing the lighthouse and lightning bolts, but the lightning strikes were of the cloud-to-cloud variety so i took another approach. I decided to gather light from multiple lightning flashes and use that to light the lighthouse and kilauea point against the ocean and sky. It was incredibly difficult finding enough light to enable the auto focus so that the lighthouse was sharp and clear. It was just too dark for me to manually focus on the lighthouse with any clarity. I tried and tried, but nothing came out sharp. So I waited and waited for the storm to get closer. I waited for the perfect blast of lightning-- one that would be both close enough and bright enough to provide sufficient light for the auto focus to pick up detail in the lighthouse and "focus" where I wanted. And I got it. Once focused, i then turned off the auto focus and tried several shots at various timed exposures, hoping to get several flashes of lightning in one exposure. well, my plan worked, and after three and a half hours in the rain and storm, i got the shot. The reward was well worth the difficulty.
Kilauea Lighthouse and Refuge, Kauai, Hawaii

In the Light of Lightning was taken around 8:45 pm in the middle of a lightning storm. It is a single exposure, 25 seconds long. During the exposure three separate flashes of sheet lightning lit up Kilauea Point and the 100 year old Kilauea Lighthouse. On this night I photographed at the cul de sac by the gate to teh lighthouse and National Wildlife Refuge for about 3 hours, leaving around 9pm. At the time, I lived in Princeville so it wasn't a long drive home, but I would not have made it in time to meet curfew. Thank goodness there was no curfew (or Coronavirus) then! Since I released this photograph in late December of 2012 it has been my best selling image. Only two metal prints remain, and I don't have anything else like it. It is, without doubt, my most unique photograph. 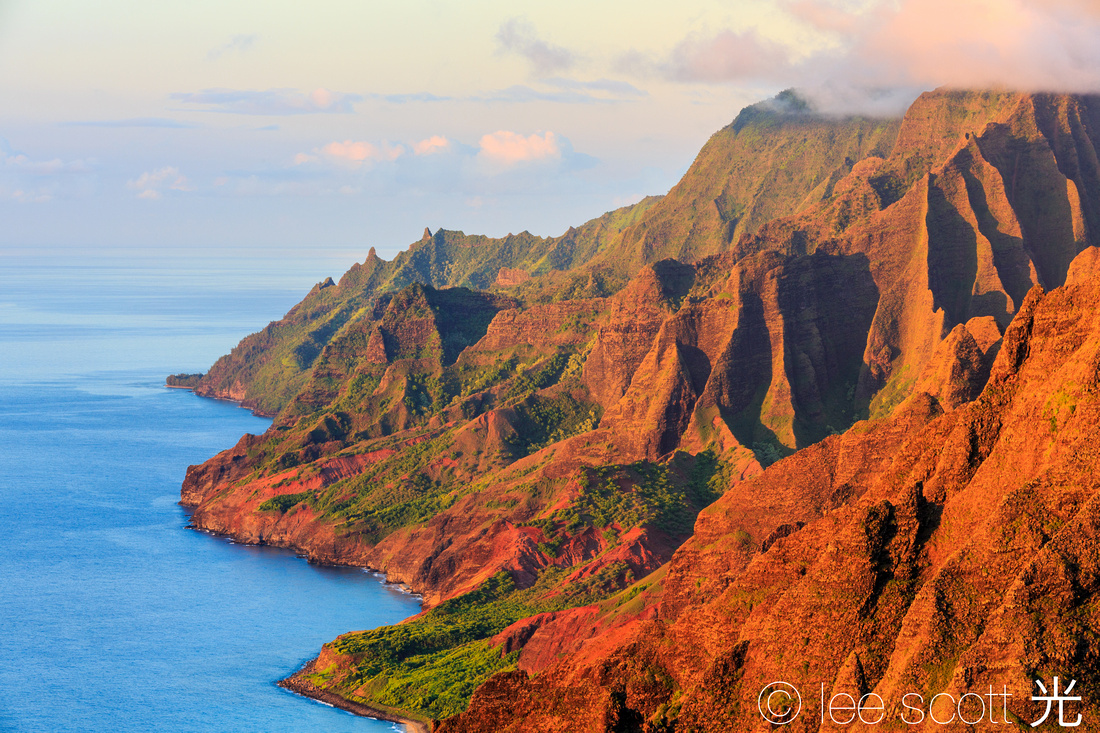 The Na Pali Coast at Sunset Seen from the NualoloA four mile long sunset hike along the Nualolo Trail led me to this magnificent view of Kauai's famed Na Pali Coast. I hiked back in the light of the full moon and headlamp with my mind and body full of nature's mana or power.
Koke'e State Park, Kauai, Hawaii

Na Pali Coast at Sunset Seen from the Nualolo Trail is another photograph that wasn't taken after 9pm or before 5am, but it couldn't have been done with a curfew in place. You see, I hiked out here for sunset and then hiked back in the light of the full moon. The Nualolo Trail is a difficult 8 miles long trail, but it's one of the best hikes on Kauai. I had been thinking about doing this hike at sunset for some time and was happy to finally accomplish this goal. I'm thinking of doing it again real soon. I'll keep you posted... 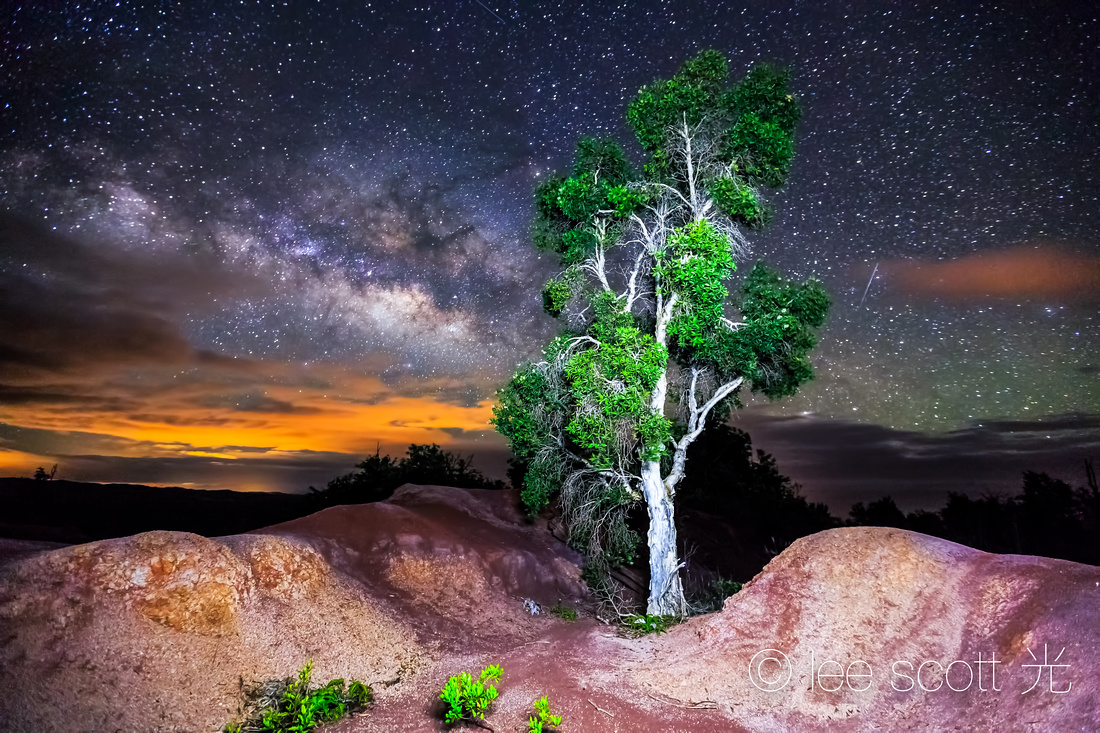 Koke'e Night Sky and Paper Bark TreeI'm always looking for lone trees. I just love to photograph 'em. To me, they are symbols of strength, perseverance, community, shelter and much much more.
I drove up to koke'e early one evening on the night following a newl moon, looking for a tree that i could include in a shot of the milky way. I had been up the night prior, and photographed a big, fluffy mango tree, but wasn't totally satisfied with the results. I actually felt like I left something up on the mountain. So I decided to go up again and give it another try. I'm glad I did I am really pleased with this shot. I really like the dynamism of this picture. I also like how the paper bark tree encourages you to leave it and explore the image in it's totality. I wanted something that would show the earth and universe on the same plane. And I think this image conveys that feeling. After taking several shots, I called it a night and slept under this sky at my campsite in Koke'e. Waimea Canyon and Koke'e are truly special places on this very special island.
Waimea, Kauai, Hawaii

Koke'e Night Sky hints at the magical possibilities of Kauai. It's a dreamy image, and like all of my photographs, it is a single exposure. For this shot I used a head lamp and shined it on the tree during the 30 second exposure. Aperture is wide open at f/2.8 and I'm shooting at 16mm wide. There is residual light from sunset and a lot of ambient light from Port Allen reflecting off the clouds. A couple of shooting stars are also visible. I like this one. There's a lot to look at and it keeps bringing me back for more. After taking this photograph I camped at Koke'e State Parka and slept under this sky. Yes, the magical qualities of Kauai. 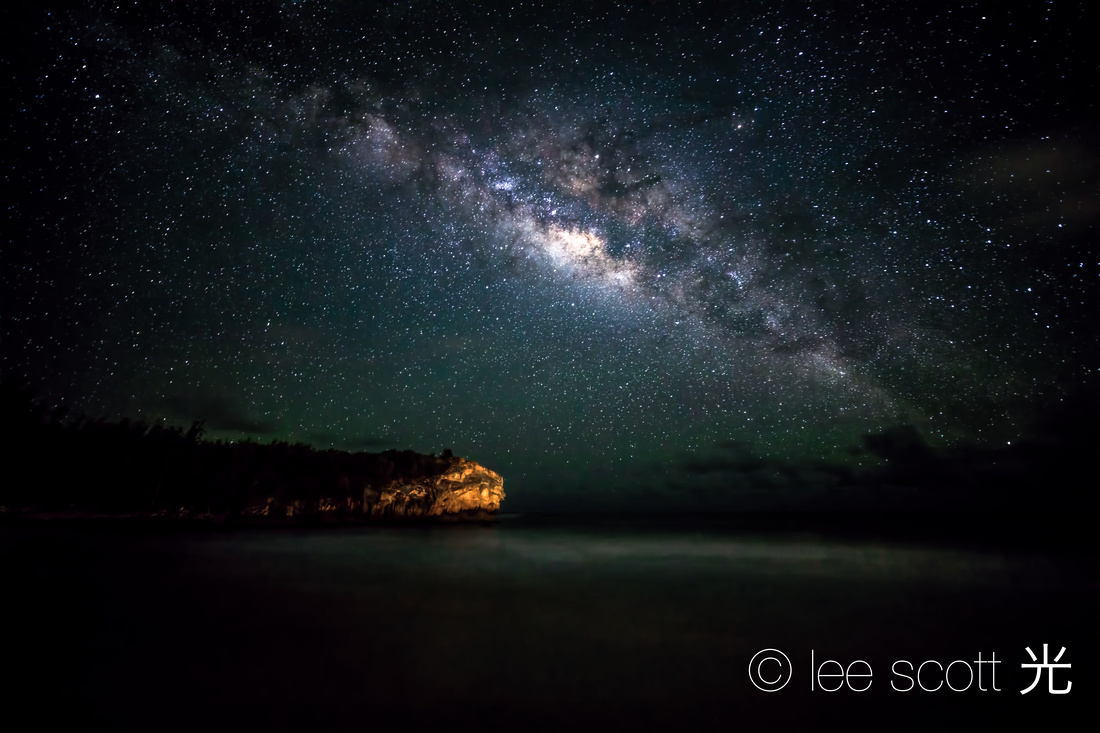 ShipwreckedThe Milky Way shines over Shipwrecks Beach in Poipu. Summer is here and the stars are out!
Poipu, Kauai, Hawaii

Shipwrecked is truly a night shot. I took this photograph at 10:47pm at Shipwrecks beach in Poipu. I try for one night sky photograph a summer and this was the one for 2017. I like the contrast of milky way and ocean and the gradient illumination on the cliff. By the way, the light on the cliff is ambient light coming from the Grand Hyatt. I didn't add any light or utilize a head lamp or light beam for this one. I shot this photograph at 15mm using an ultra wide angle Zeiss Milvus prime lens, f/2.8, and a 30 second exposure. 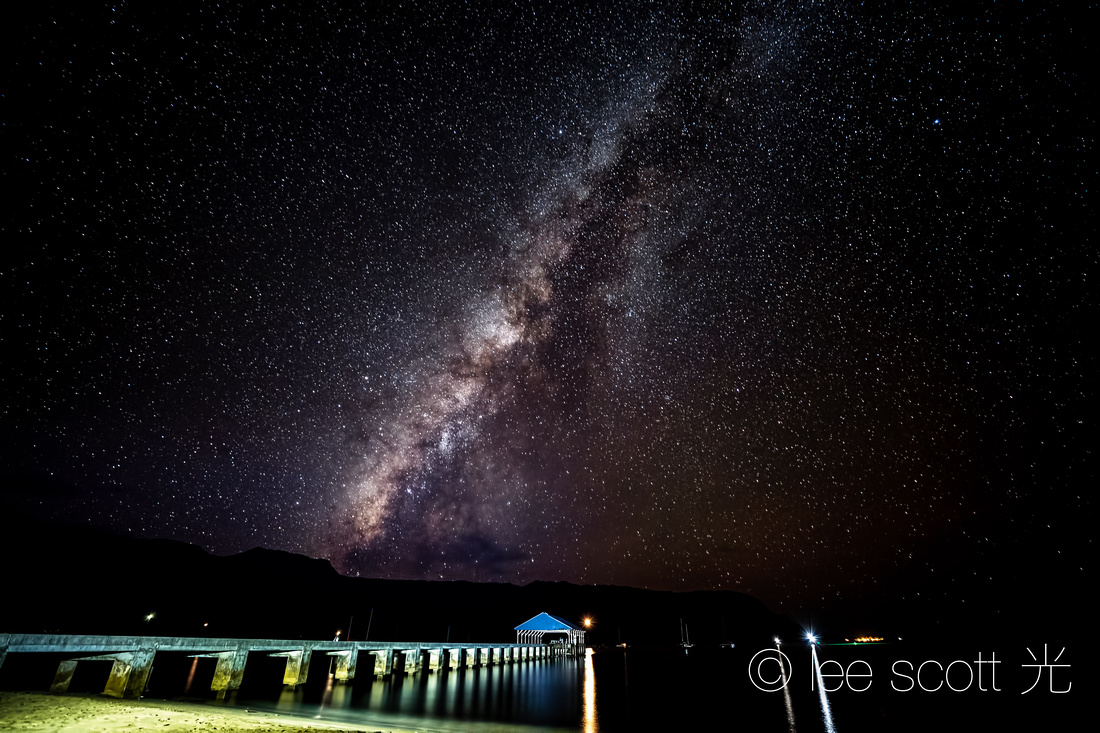 Peering into the Night SkyI try for one night sky photograph a summer. And in 2019 I got clouded out on my first attempts in June. I was traveling in July so that left the days before and after the new moon in August as my last real chance for a starry night photograph. Luckily, clear skies welcomed the new moon in late August and I was able to take this photograph at Hanalei Bay. I painted the pier with light with my headlamp, and might have upset some fishermen while doing so. Because they decided to shine their lights back towards me. After this happened I decided to pack it up and go home. It was late anyway (about 1:30 AM) and I was getting sleepy.
Hanalei Bay, Kauai, Hawaii

Peering into the Night Sky was a long, late night. I started at the famous, old church in Hanalei-- Wai Oli Hui La'a-- but there was too much light pollution for me to pick up a lot of stars. After fruitlessly trying for something that the conditions wouldn't allow, I decided to move to Black Pot beach where I took this photograph-- at 12:33am. Here, I again used a head lamp to light up the pier. This technique is called "light painting". It takes some trial and error, but once you get it dialed in it can be an effective technique to have in your bag of tricks. 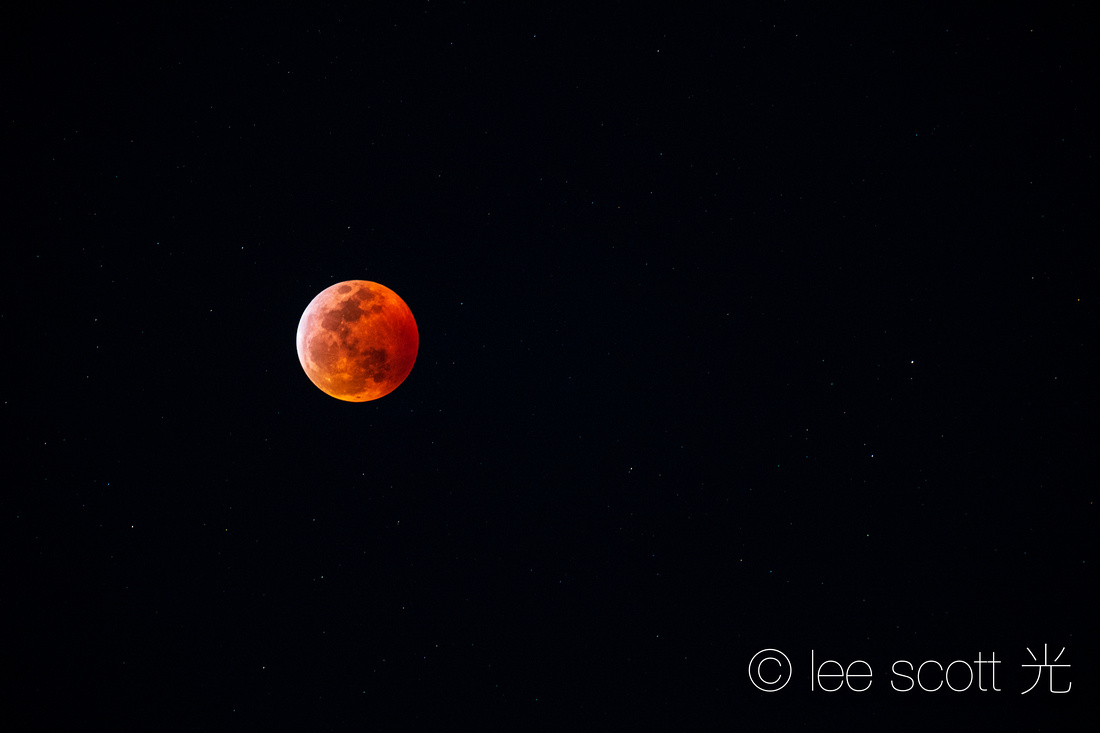 A lunar eclipse turns the full moon red. These are so much fun to photograph. This eclipse occurred quite early in the evening, actually. And while this particular image was taken outside of the verboten times, the walk back to the car was a long one, and I didn't get back home till well after 9pm. So we celebrate the Super Blood Moon here! :-) 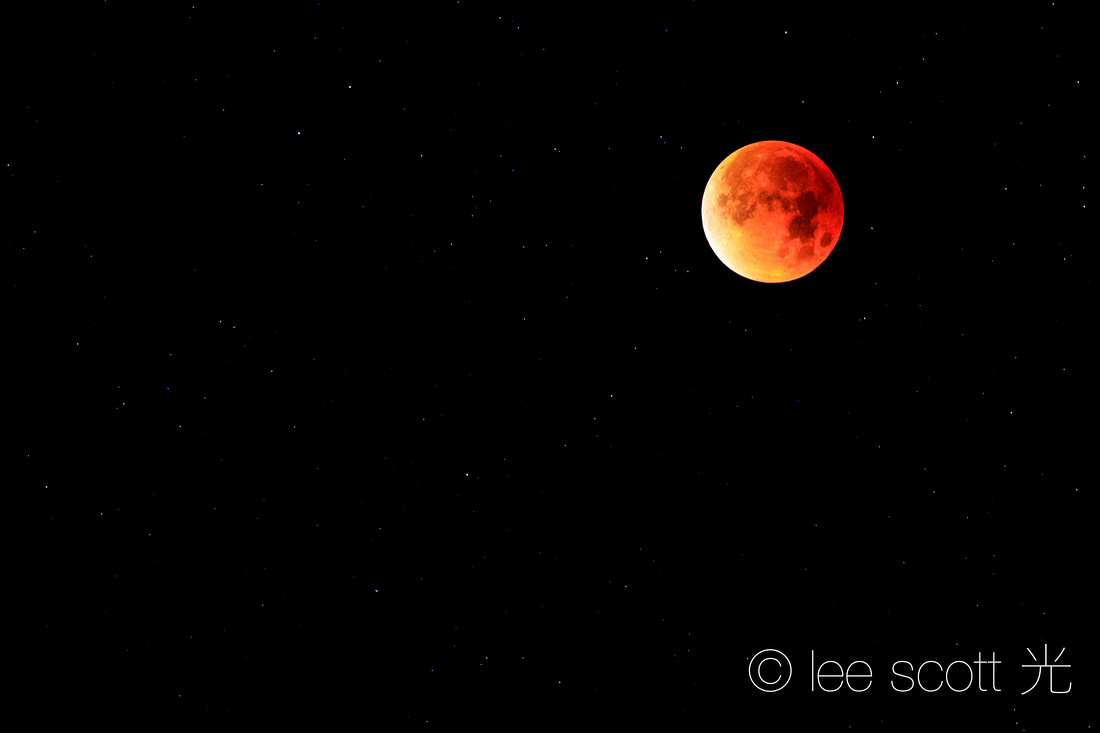 The clouds lifted around 2:45 am and the stars shined brightly. I got dressed and made my way outside with camera gear to photograph the rare super blue blood moon— the first one since 1866. This photograph is from the peak, around 3:20 or so. I like these events that bring people together from all over the world. It makes me feel connected and happy that nature is the connector. 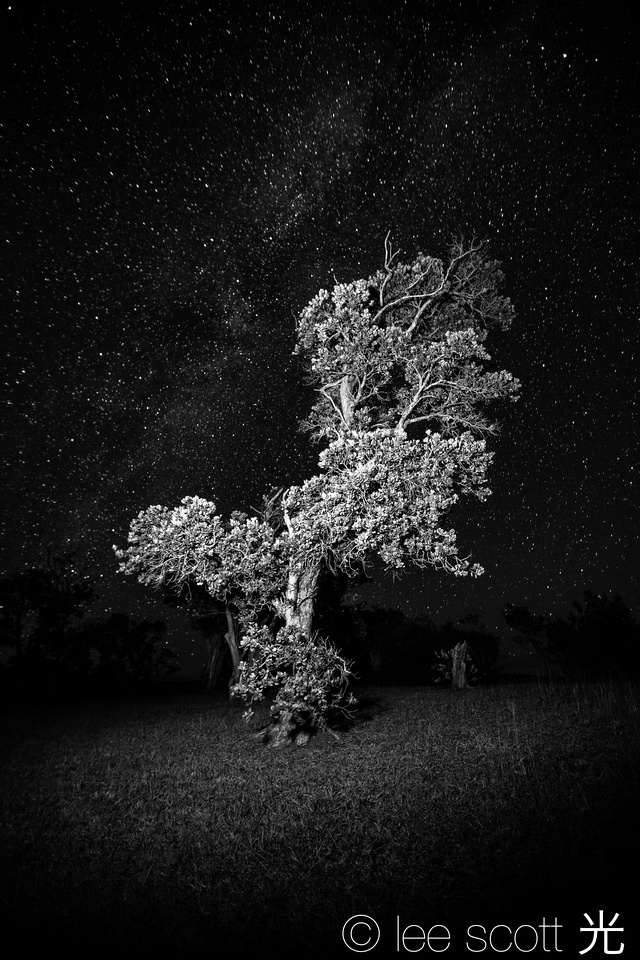 “How can we know the dancer from the dance?”

This is my favorite photo from a night of amazing star gazing in Koke’e State Park. I hoped to photograph a meteor shower, but was unlucky. I don't think I caught a single one. 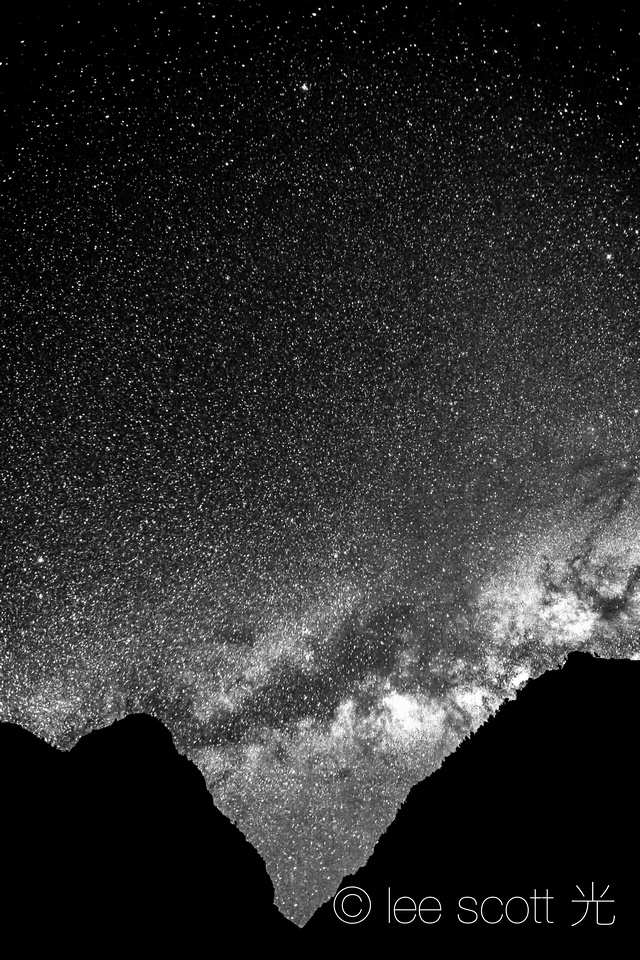 Closer Than You ThinkKauai, Hawaii

The stars are closer to us than we realize. Our dreams are closer than we think. And so, too, are our fears. Let's brush them aside and grab our dreams. 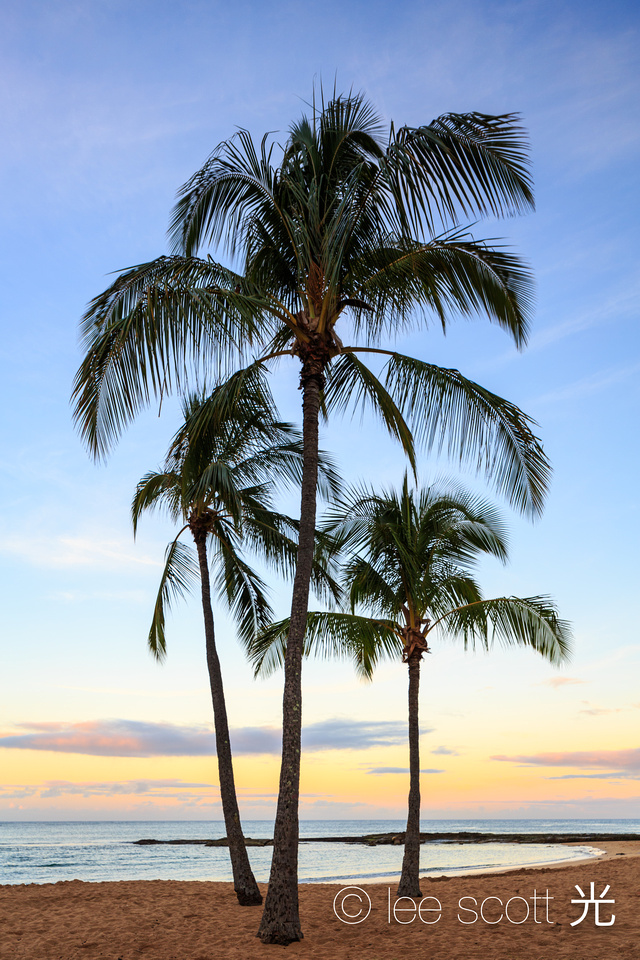 Golden hour on a west side morning can be quite special. But if you are staying on the North Shore it can be a very early start and a long drive past many wonderful sunrise spots along the way. I lived on the North Shore of Kauai for 10 years and wanted to to try something different on this morning. So we packed up the camera gear and coffee and made a day of it on the west side, stopping first at Salt Ponds for this photograph of palm trees gently blowing in the breeze. Now, I live on the west side so I can make it down here every morning if I wished. Funny though.  I'm thinking about North Shore sunrises now that the curfew stay pau.