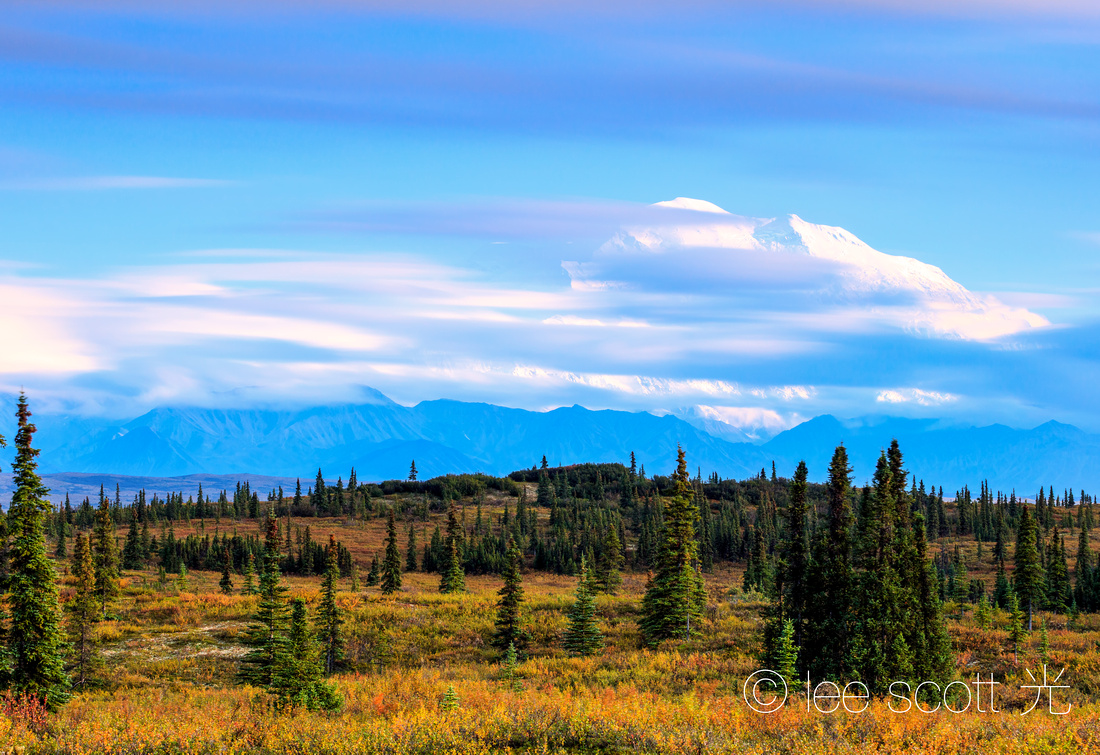 Campsite #14 (Wonder Lake Campground)This long exposure image shows the view right outside my tent at Wonder Lake campground at mile 85 of the 92 mile long Denali Park Road. The Mountain is just 26 miles away! This photo was taken literally right at my campsite. I think I set up the tripod about 3 feet from the picnic table, upon which I rested my camera bag and hot green tea. In this photograph I wanted to show the interplay between The Mountain and evening sky. It seems that much of my time in and around the Wonder Lake area was spent looking up at the sky, towards the High One and wondering if the clouds would clear and if Denali would become visible.
I used a 6 stop grad nd filter in combination with a 10 stop nd filter and polarizer when taking this photograph.
Denali National Park, Alaska

I will be traveling to Alaska again this July and to help prepare for the trip I have been going through photographs from my August 2016 visit to Denali. Part nostalgia and part study, going though old photographs help me determine where I want to focus my time and what animals I want to read up on. This year, I'll definitely go to Katmai NP for a week (July 17 ~ 24), but other than that, my schedule is pretty open. I may go to Denali again (if I get the photographer's permit-- definitely!), or perhaps I may go down south to Kenai Fjords NP. Or up north to Wrangell St. Elias NP, the largest national park in the US. While the itinerary is still undecided, the planning is well underway. And a large part of the planning involves Google searches on locations, parks, maps, campgrounds and images of all of the above. Since I rely heavily on these searches and the blogs of other photographers and travelers, I thought I'd put something together about two of my favorite Denali NP campgrounds: Wonder Lake and Teklanika. This post will present photographs from my 8 days camping at Wonder Lake. 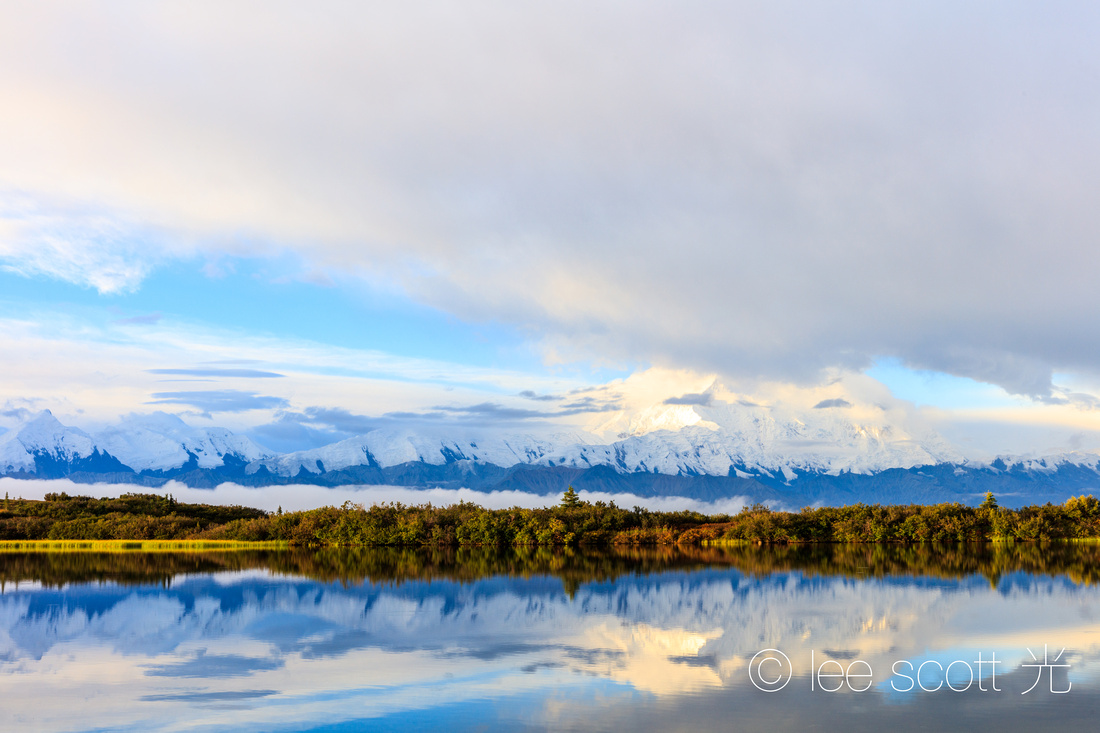 Wonder Lake Campground is at mile 85 of the Denali Park Road. Accessible by Camper Bus or a very long bike ride on the one road in the park. It's the closest campground to Denali, which is 26 miles away. The first couple of days that I was there the mountain was completely covered in clouds and I didn't know exactly where it was. I mean I knew it was in "that general direction over there", but I couldn't quite place it, which after seeing it feels really stupid. I tell people now that seeing The Mountain is like seeing God (whatever our personal concept of God is). How could you not know The Mountain was there? 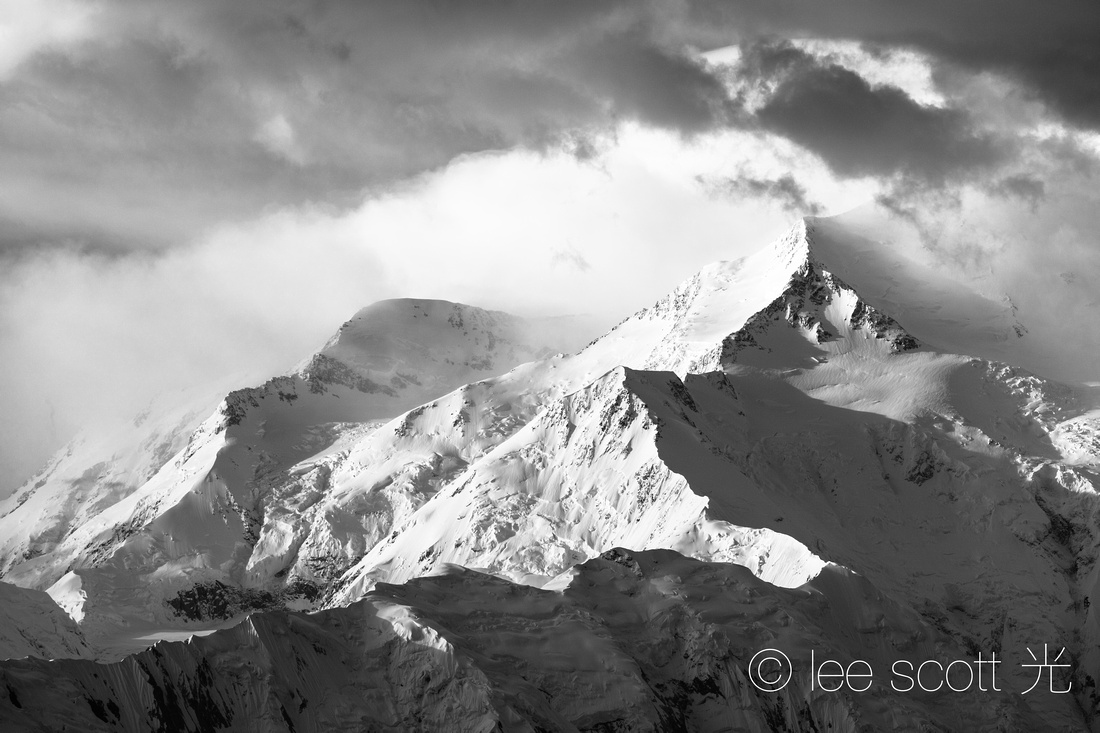 The Mountain, from the Wonder Lake area of Denali NP, Alaska

The Wonder Lake campground has 28 sites spread out along a gentle hillside. I imagine each site has stellar Denali views and my site (#14) looked right at the mountain. There is a covered, food storage area with common picnic tables and store rooms for food and gas/stoves. This was really nice as it offered shelter during rainy days and also served as a place to meet and chat with other campers. Wonder Lake itself is about 500 yards behind the campsite. A gravel road leads to the lake, but no path or trail leads around it. To get the iconic scene of Denali reflected in Wonder Lake you have to go back to the road and walk about 5 or 7 miles towards Kantishna. I think there's actually a hill called Ansel Adams Hill where you can see the mountain in the lake. For my reflection images I chose a couple of ponds that were 2.5 miles from the campsite. I walked to these spots every morning and evening for sunrise and sunset. Mornings until late August see the sun rise earlier than the bus pickup at Wonder Lake so if you want first light on the mountain, walking or cycling is the only way. I've heard that September's daybreak affords a more leisurely start and the bus could be an option. For sunset you could take the bus and ask to be dropped off, but you would have a long wait for last light. Also, your dinner would perhaps be earlier or later than you might like. 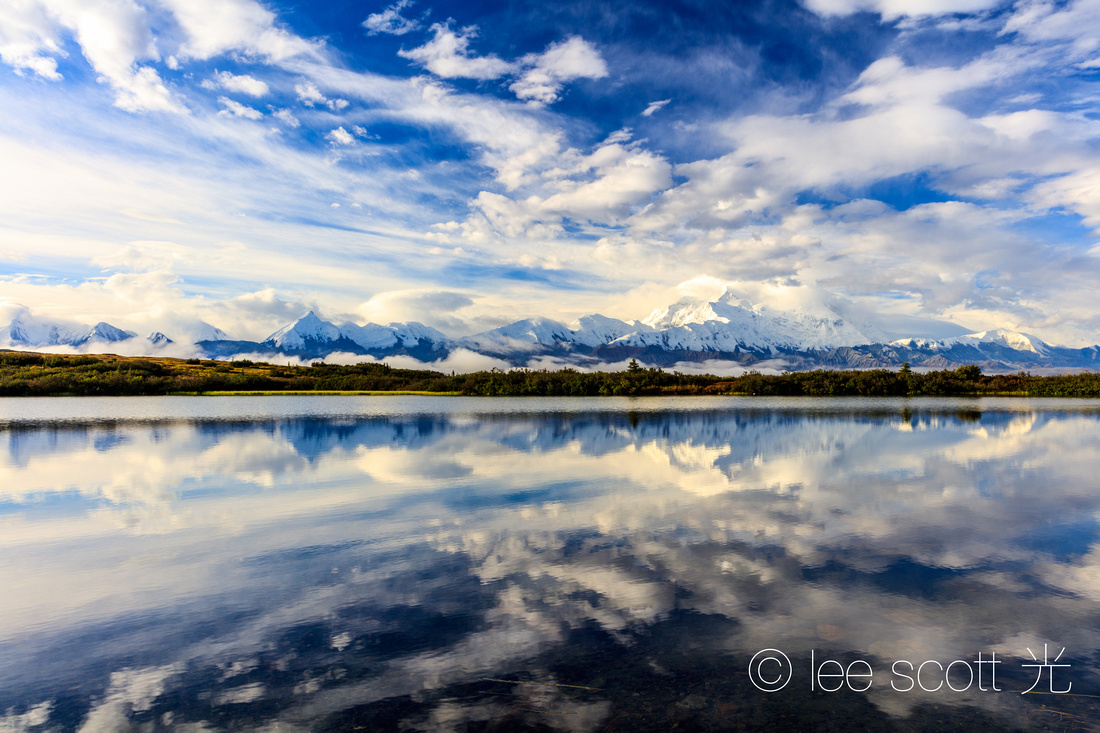 Denali BlueA Japanese photographers who has been photographing the wildlife in Denali National Park since 2000 told me about a reflection pond that he liked to visit from time to time. His reason for liking the spot-- it was quiet. Well I like quiet too, so I decided to give it this spot a try. And I loved it. I think I went back every morning and every evening for five straight days. It is such a special place of high beauty and exquisite silence. In all five days, I never met anyone else. One morning, however, I did see a cow moose easing through the grasses on the pond's edge. And one night after photographing sunset I saw 4 moose, 3 porcupine, countless snow hare and a few stars on the two and one half mile walk back to my campsite.
On the morning that Denali Blue was taken, I thought for sure I would finally see The Mountain. But just as the clouds above were lifting definitively, a curtain of fog came up from below. It was like a magnificent trick played on my expectations. A lesson learned: have no expectations. Just hold joy in the heart and be glad that there are still such beautiful places and such quiet places left on our Earth.
Denali National Park, Alaska

Wildlife viewing at Wonder Lake was pretty spectacular. Every day I saw a moose. Some days a beautiful cow moose and other days one or two massive Bull Moose. One night walking back from the reflection pond I saw four different moose and ran from this one: 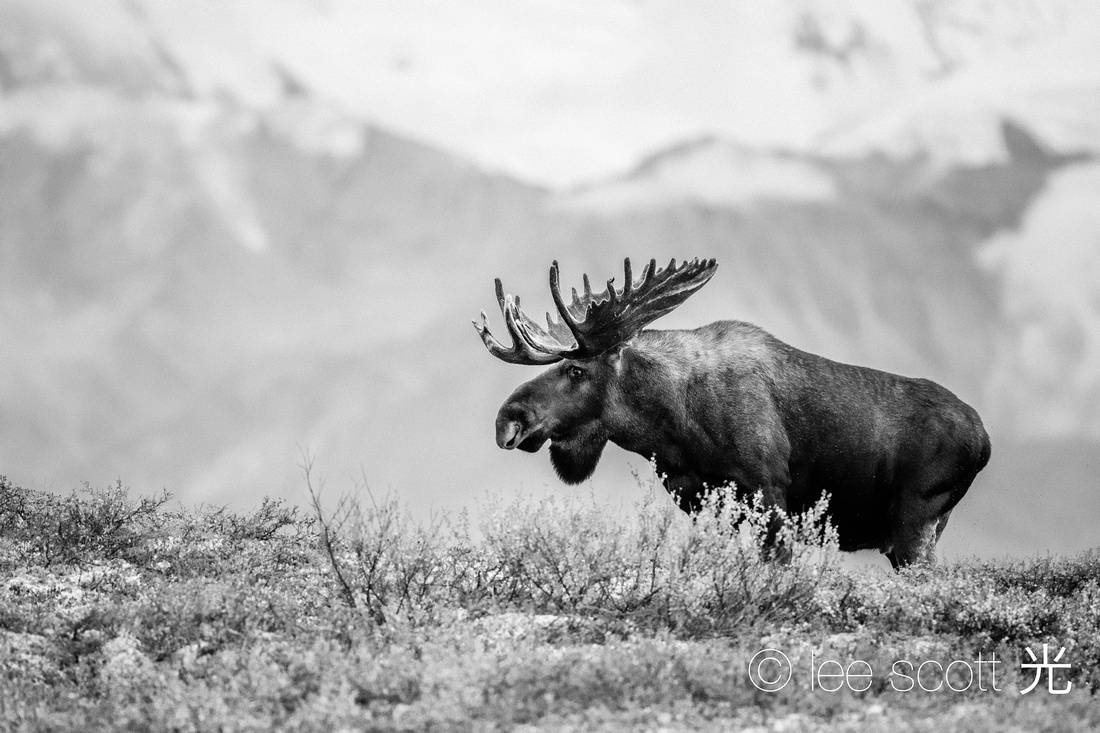 He liked to munch on the vegetation in the campground and if you waited long enough it's likely that you would see him walking between the tents, towards the lake or the through the vast fields of blueberries and tundra. 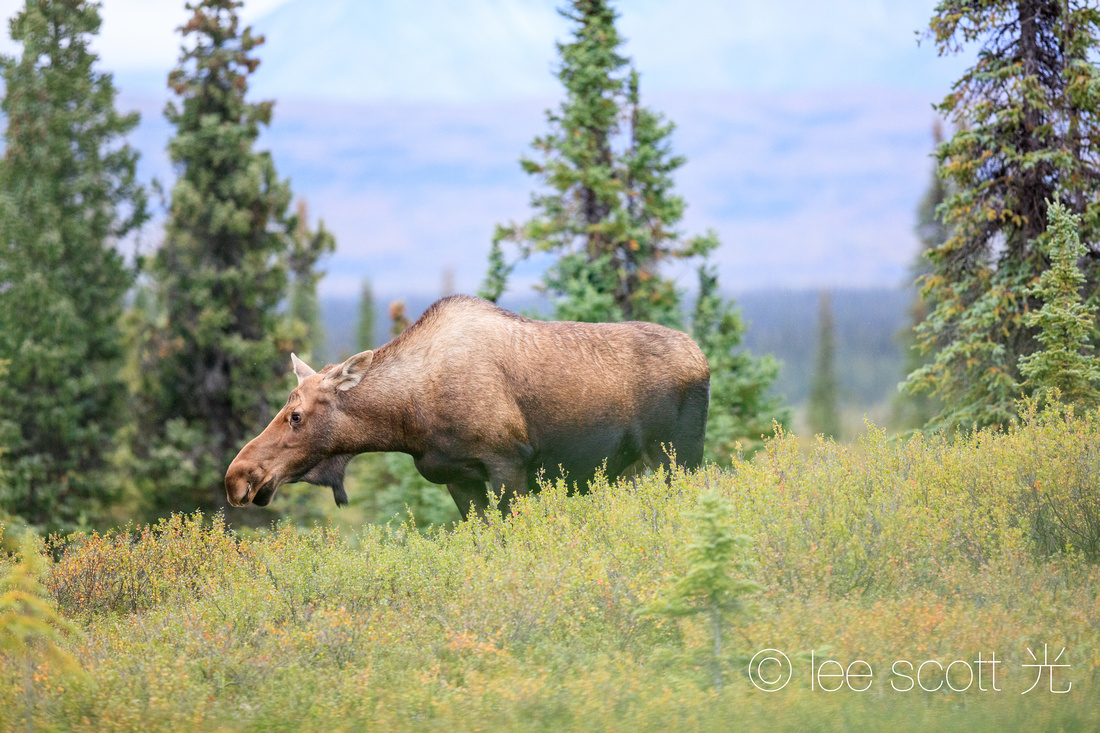 The moose rut was approaching and later in August the cows and the bulls begin to share the same spaces as they look for a suitable mate. One area of the park-- well away from Wonder Lake-- was closed to foot traffic as the bulls in that area were becoming aggressive. 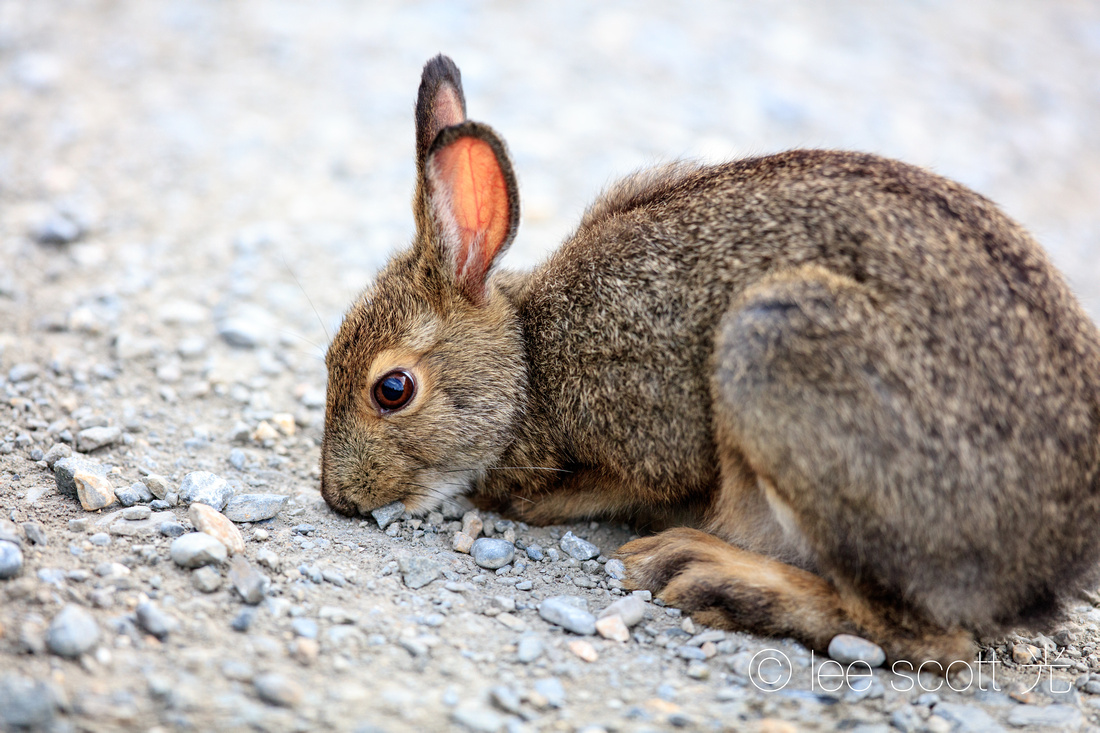 Critters big and small in the Wonder Lake area of Denali NP. I also saw porcupines and a wolf! 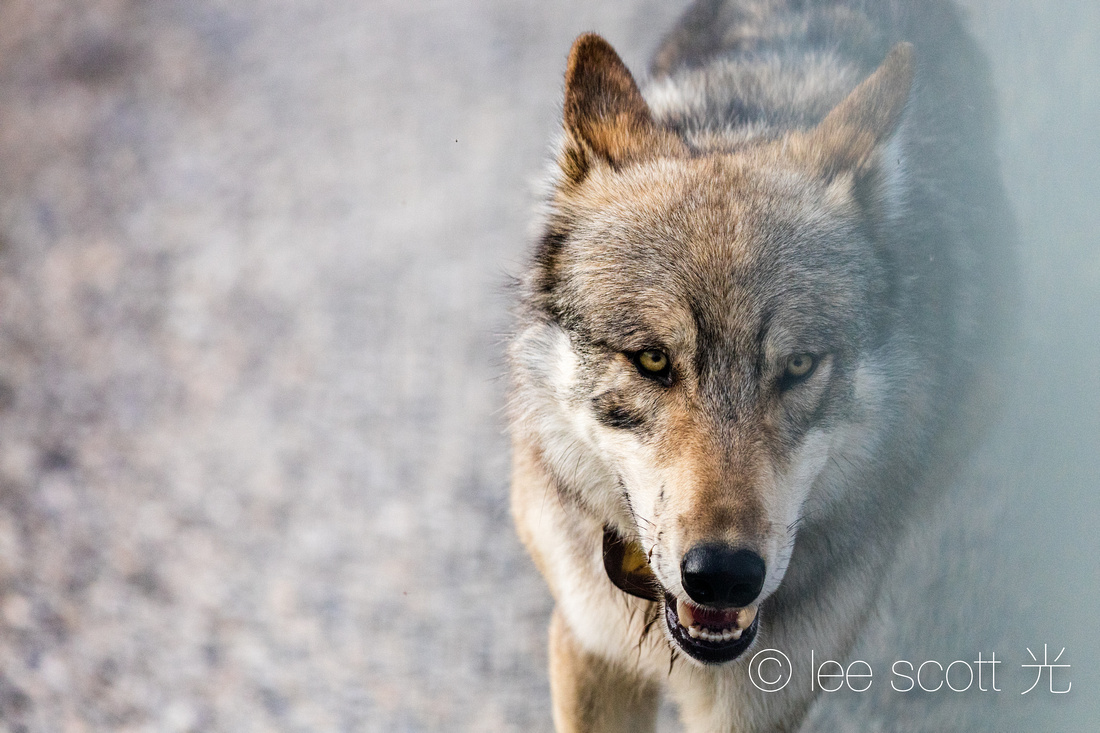 Call of the Wild (The Wolf in You)Denali National Park, Alaska
Call of the Wild was published to National Geographic's Daily Dozen on April 27, 2017. See more at the link below:
http://yourshot.nationalgeographic.com/daily-dozen/2017-04-27/

The abundant colors is what surprised me most about Denali. I guess I thought it would be just an expanse of snow, but it wasn't. Instead rich greens, reds and yellows met the eye pretty much everywhere you looked. I especially liked the grasses that grew around Wonder Lake. 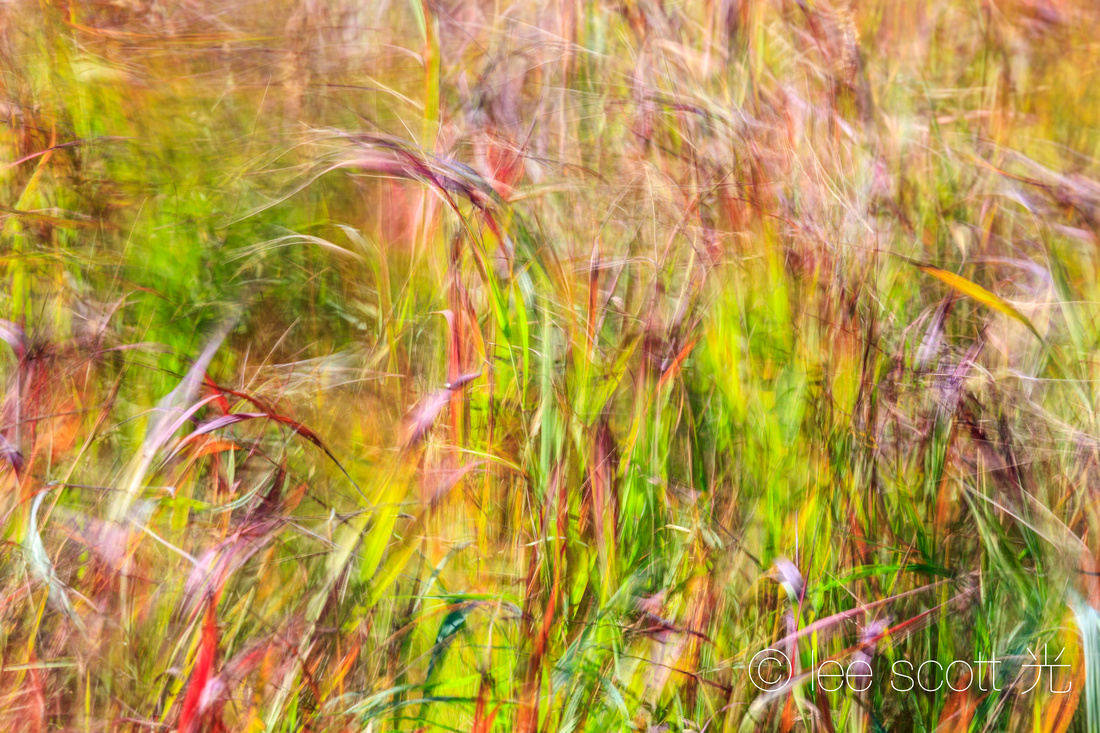 Most of my time, however, was spent walking to the reflection ponds, waiting for the clouds to clear and walking back to my campsite. Here are a few more of these early mornings and late evenings: 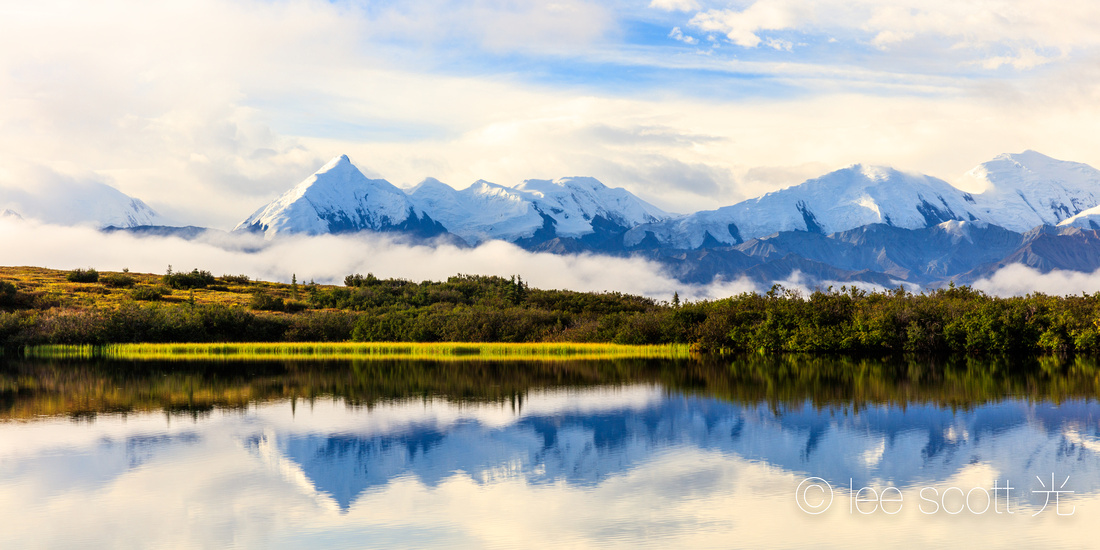 The Light Changes but the Clouds Don't Completely Clear 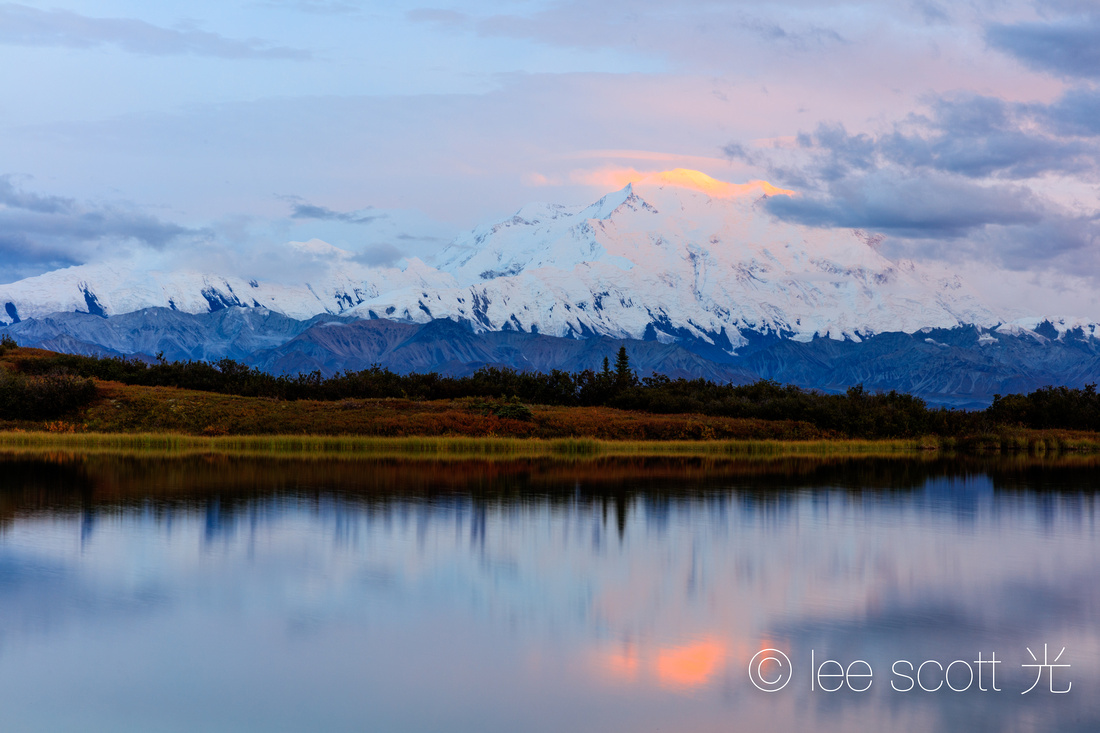 Alpen Glow on the Top of Denali, from the reflection pond near Wonder Lake, Denali NP, Alaska 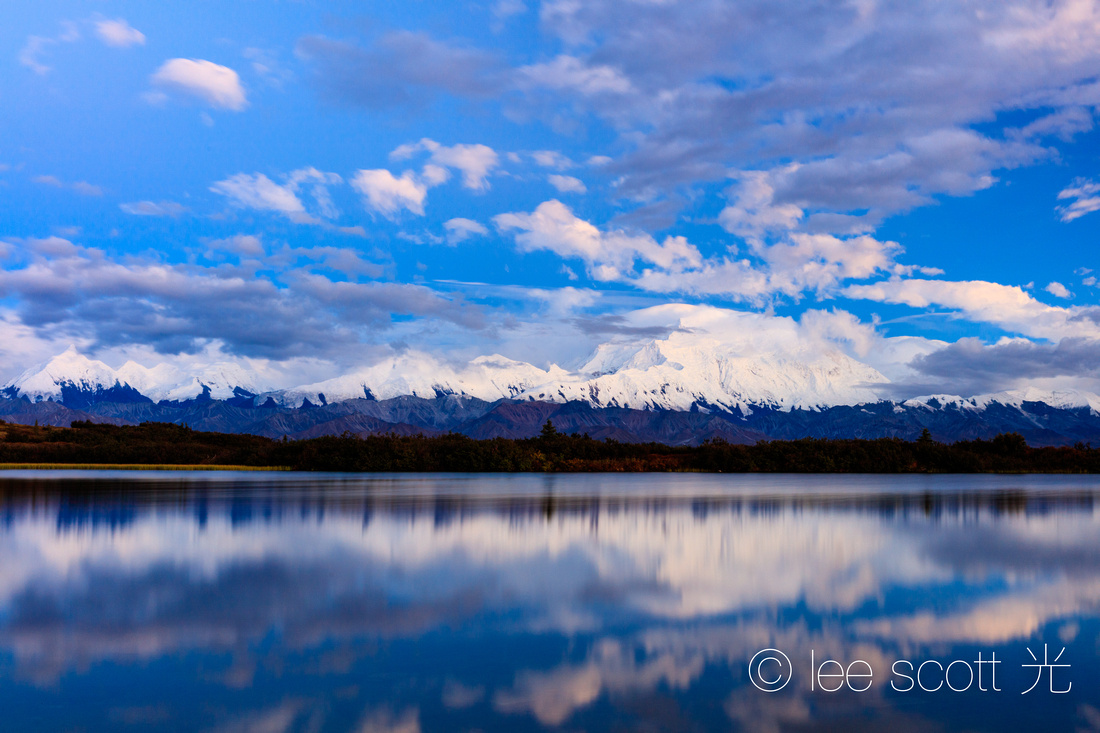 Of the three campsites where I pitched my tent in Denali NP Wonder Lake was my favorite. Teklanika Campground was my second favorite and Riley Creek Campground was a necessary stopping point at the beginning and middle, but nothing more than that. In the next post I'll share some photos from Teklanika.