today i'd like to briefly look at the changes that can take place during one photo shoot. we'll look at 35 minutes through five photos taken at 7 minute intervals. in photography, 7 minutes is a really long time! new worlds, colors, and emotions form and fade in just seconds, and as a photographer i think it is important to be aware of the changes and be prepared to adapt to them--- you'll need to be willing to change your perspective, subject, and settings quickly. it's also important to realize that it all changes so don't give up on a shot too soon and don't be too rigid in your ideas.

i often say that photography is all about compromise-- how much light do you accept? how much movement? how much depth do you wish to sacrifice for clarity? how much color for light? the list goes on and on, and it's all of these compromises that make up much of the technical challenges of photography. and of course you also have to compose the shot, but before all of that you have to choose the subject.

this series of photographs were all taken in one shoot at tunnels beach. when i arrived, i had an idea of what i wanted to shoot-- tunnels beach with setting sun and mount makana. but i was unsure of exactly how i was going to frame the shot. so i arrived early and played around with it.

here's the first shot in the series-- 6.40pm. as you can see the sun is just now beginning to approach the horizon line of ocean and sky. and as far as the subject goes, i have a lot of the mountain and beach in the frame. 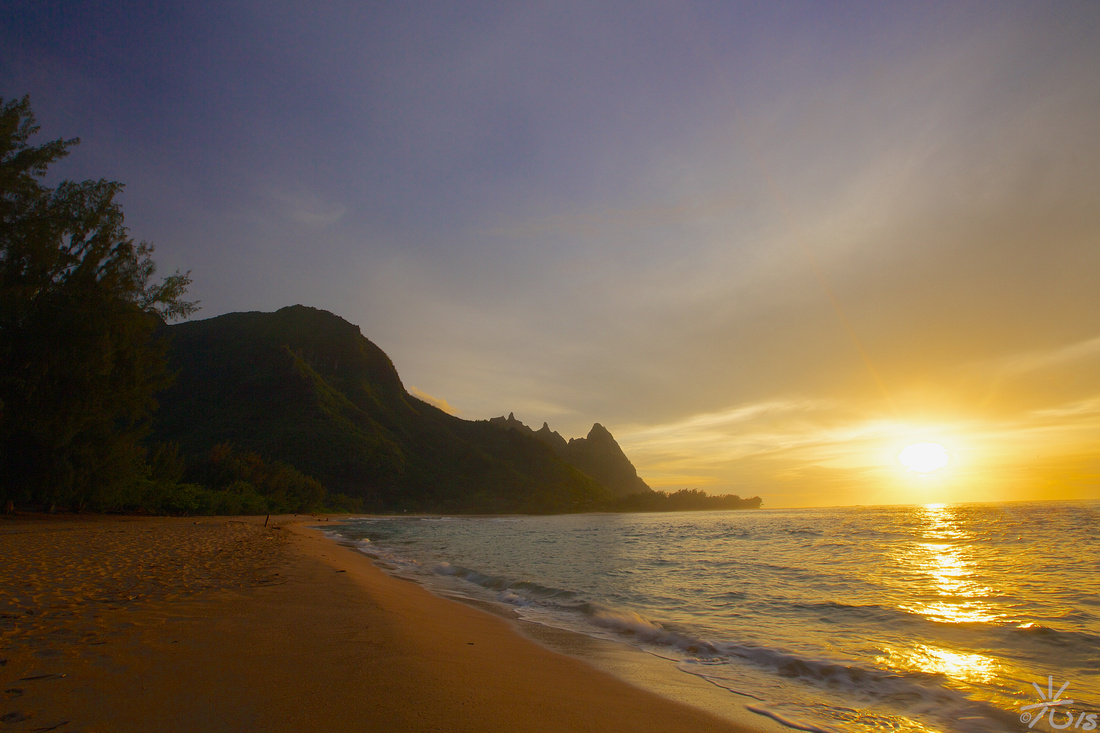 now the second photo, 6.47pm, shows a shift in perspective and mood. 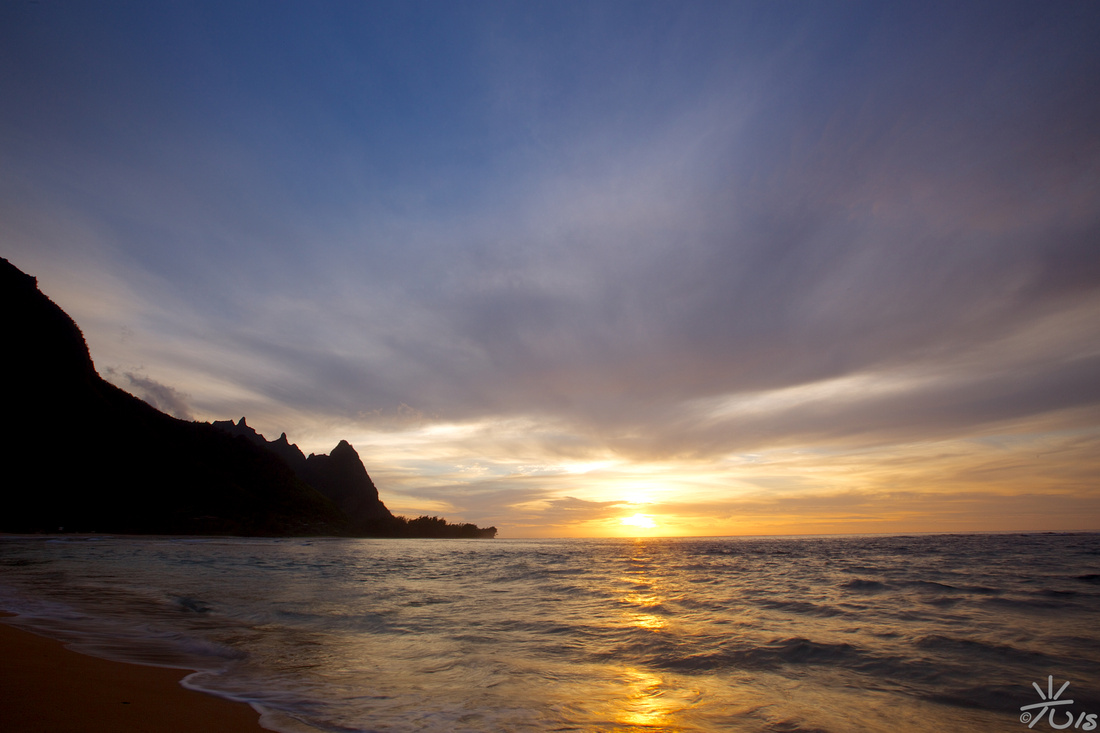 i think the change, along with the softer light of the lower sun, brings the viewer closer to the image. i tried to bring a hint of intimacy to the subject by inviting the viewer into the image. in a sense, i've invited the viewer to become a participant in the scene. notice how the waves come much closer in this shot as compared to the one before with the long, straight beach scene. i like this change better, and i stick with it for the rest of the shoot.

in the 7 minutes between the two shots, the subject changed-- really it changed completely. the subject went from a distant beach and mountain to the impressions of the potential viewer. now i just needed to wait and see what colors would come. 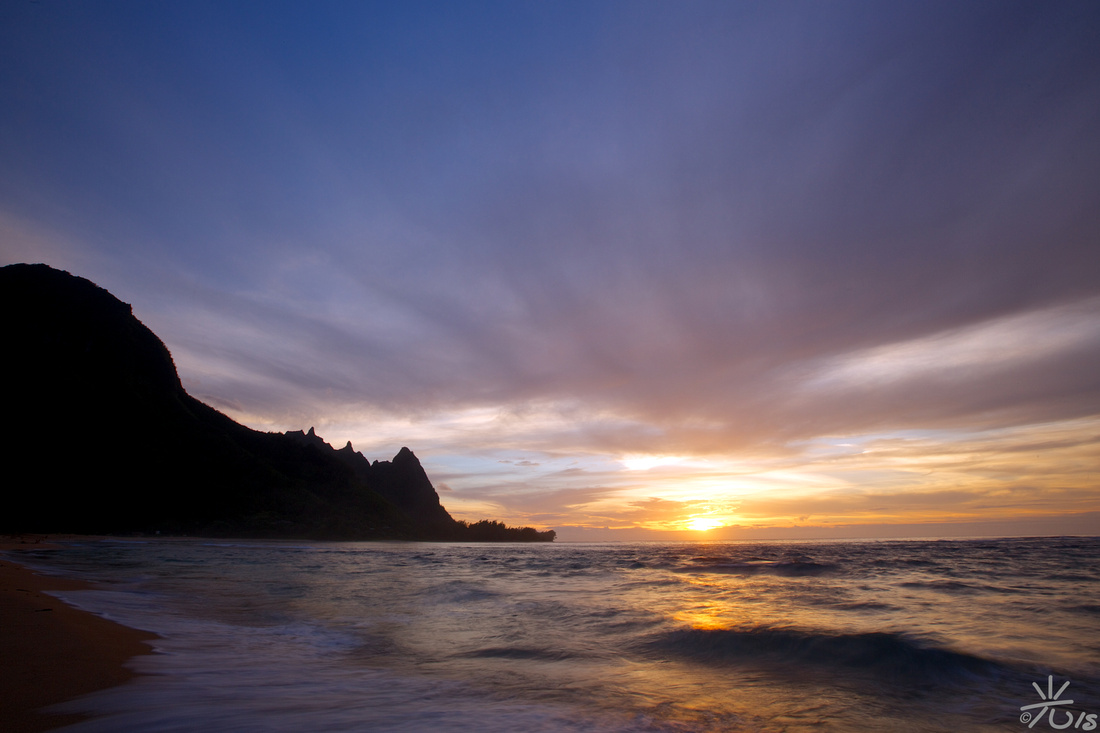 cool. a nice scene. softer waves. less light available so i am able to give the show the movement of the waves, which makes them appear softer. all of which plays on the emotions and allows the viewer to take more of an active role in the image. it's almost as if they can step into the image. or better yet, it's as if the image is beginning to pull the viewer in. and this is when you know you've got a good picture-- it literally pulls you in. it makes you a part of the scene. and when that happens, the mind finds a myriad of connections to the place, image, scenery, memory of it all.

and i think the image taken at 7.01 pm does it completely with the amazing sky, flower like wave pattern on the beach, and a surfer's footprints slowly being washed away. this shot is the keeper from the entire shoot, and i named it washed away. 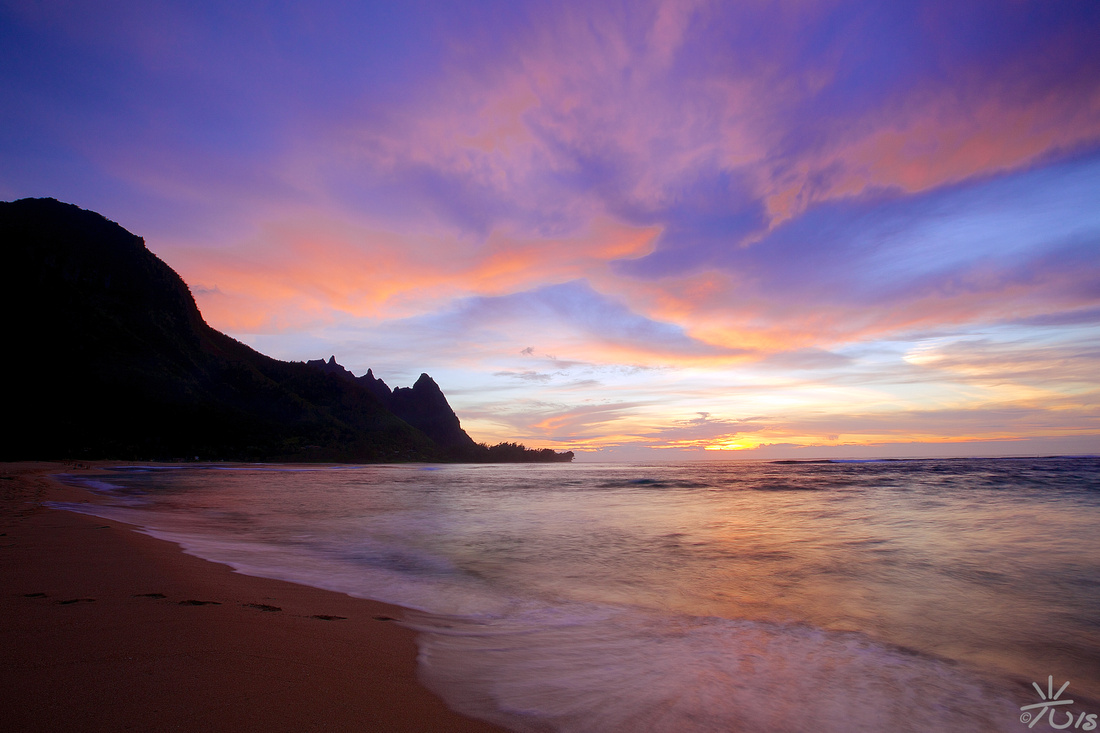 i find the scene evocative and rich in color. the mountain is there, but it doesn't over power the scene with its presence. instead the colors of the sky-- the pinks and blues dancing playfully-- become the central element to the shot. the mountain, beach and waves compliment, but the power lies not in the forms depicted, but in the emotions and feelings the create. the yellow hints at the sun shortly set. and the waves lapp at footprints, letting us know that the only constant is change and nature's beauty.

i stayed a few minutes longer and one of the last shots of the night came 7 minutes later at 7.08, and although a nice shot, the drama is gone.

and so too, the warmth and proximity of the pastel colors-- replaced by a cool blue. and with those gone so is the viewer's intimate relationship with the scene. now, instead of participant the viewer is actually only a bystander with nothing invested. only the sense that something was missed. that's the affect of time. that's the power of color. that's all the difference in the world.

washed away is currently on display at the photo gallery, light source, in kapa'a, kauai, hawaii. stop by if you get a chance. mahalo!